The book World Made by Hand by James Howard Kunstler is a tale of good and evil, hope and despair, tenderness and love, and mysticism and the supernatural. It overflows with remarkable, well-developed characters and has an interesting take on life after the electricity stops and the cars cease to run. I found it to be a post-apocalyptic story unlike any I had read before.

I was so impressed with this book and the author’s exceptional story telling ability that I did little else but read, putting aside two other books I was reading, so that I could finish it in a day or two.

In many books about the end of the world, the calamity—how the world ended—drives the story. This one is a departure because World Made by Hand is a character-driven story. The people that populate this book make the story compelling, and it would remain as captivating if it took place in the 1850s. That it is set in the near future after a collapse is a bonus.

Some authors in this genre, which I have dubbed prepper lit, are not very polished at the craft of writing. Their ideas and concepts drive the story better than their choice of words. In Kunstler’s case, he is a wordsmith as well as a masterful storyteller with well-developed characters he puts in interesting situations that force them to grow. This is one of the best written books I have read in some time in any genre and should have broad appeal outside those who read prepper lit.

Kuntsler’s Future of the World

In this version of the future, the fiat dollar has so little value that a 100-pound bag of grain costs $9,000. Silver is the preferred currency, and dinner and a room at the inn can be had for a pre-1965 quarter. Gold is rarely seen but highly valued.

The electricity is out and has been for years. There is no law enforcement. What little of the military is left is reportedly fighting on the Mexican border, although we are given hints that there is or was a war in “the holy land.” Few people leave their town and most who do don’t make it back. There is little news and less government. Towns and villages, including Union Grove, the setting for this story, are on their own and must survive or fail based on their own resources and the ingenuity of their residents.

We don’t know what caused the collapse or when, nor do we need to, but there are clues. A bomb in Los Angeles and then one in Washington. Nuclear, we presume. A terrible flu killed many more. Large cities collapsed. Government largely disappeared and powerful men, what you might call warlords, are taking over and ruling all that they can see. Some are benevolent dictators, almost feudal lords, and others less so.

One of my chief complaints about a book I recently reviewed was that the scenario wasn’t believable. I could not suspend disbelief long enough to enjoy the book.

I found the end-of-the-world scenario and people’s reactions to it in World Made by Hand much more realistic and believable. It contributed to the story rather than detracting from it.

Of all the various scenarios and fictional collapses I’ve read about or seen in movies and on TV, this world reminded me most of the world in the Book of Eli (a movie featuring Denzel Washington). I could easily imagine that while Denzel is walking west with his book, the people of Union Grove struggle with depression and despair in Upstate New York. The depiction of people driven mad with despair over the situation in which they find themselves is similar, and Carnegie, the antagonist in Eli, would be right at home in Union Grove.

This book serves are a reminder of the importance of skills that might transition to a post-SHTF world. The lead character worked in marketing before the fall and survives only because woodworking was his hobby. A former Olympic athlete and high-powered sales representative finds her skills don’t translate and becomes a farmwife and church caretaker. Farmers that can produce food without modern conveniences do well. Doctors and dentists, who have skills and knowledge if not equipment and drugs, remain valued members of society. As the book states, no one there dies from an abscessed tooth.

The importance of gleaning and picking, finding resources from the past, is also driven home. This includes taking things from abandoned homes, using defunct automobiles as a source of metal, or “mining” the town dump. Such activities play an important role in this book.

World Made by Hand ranks up there with my top survivalist fiction favorites. I am ordering the next book in the series.

If you enjoy a well-written book with interesting characters, I highly recommend World Made by Hand by James However Kunstler.

About a month ago, I read a post somewhere that mentioned this book, but I do not recall where that was. Because several commenters raved about it on the thread and I had never heard of it, I looked into it. The next day, I ordered it through Books A Million and got an email response that the book was out of stock with a six week delivery time. Surprisingly, I got an email about two weeks later saying it had shipped. It showed up at our P.O. Box two days later.

In other words, I bought this book with my money and was not compensated for this review. The opinions of this review are my own and were not influenced our impacted by any third party. If you follow these links, you can buy the book on BooksAMillion.com. Your purchase will support the blog. You can also get a coupon to save 10% when you spend $25 or more. 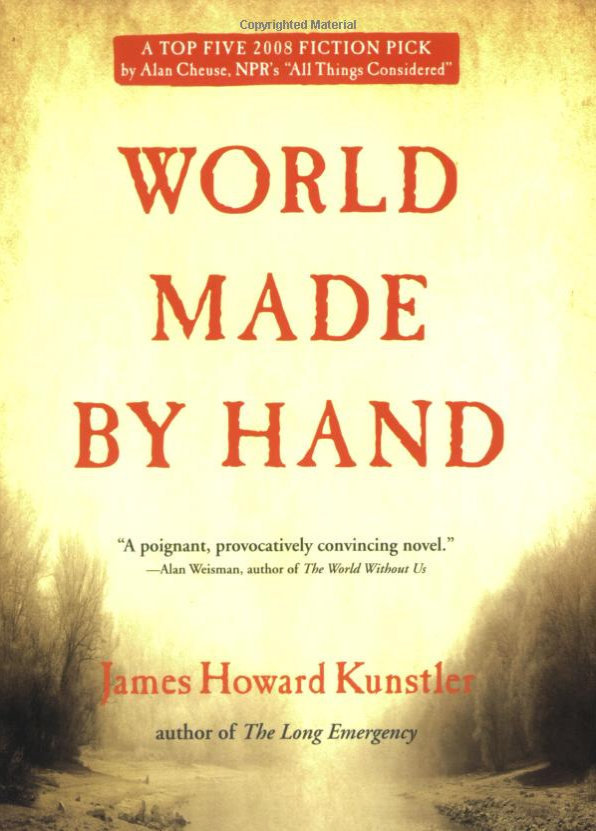 The Pros and Cons of Wells for Preppers