I carry a $250 knife that was one of those “to-me from-me” gifts you give to yourself and don’t tell your wife how much it cost.  It replaced a perfectly serviceable CRKT knife, so it definitely was in the “want” category rather than the “need” category.

I reached into my pocket one day last year after using the tractor, and the knife was gone.  Now I faced the prospect of walking up and down all those acres looking to see exactly where it had bounced out of my pocket.  Thankfully, it had popped out of my pocket before I mowed, and I found it later that day in the front seat of my truck. Whew!

There’s a reason most decent knives come with a hole for the lanyard.

I misplaced my 1,000 lumen tactical flashlight.  I carried my 800 lumen back up flashlight until it became clear it wasn’t going to turn up.  Then I replaced it with a 1300 lumen light.  Sure, I got a new light out of the deal but spent an extra $60.

Again, a lanyard would have prevented that from happening. In fact, the lights all came with lanyards, but I just used the metal clips instead.

I’ve also set my reading glasses down somewhere and never seen them again, which is why I buy them for $15 or two for $25 at the gun show.  And I’ve stuck my sunglasses on my baseball cap, only to have them fall off unnoticed some time later.  My friend who is a competitive fisherman has lost sunglasses and hats over the side of his boat. That especially sucks when they are an expensive polarized pair. Having a cord around them so they could hang from your neck will prevent those losses.

In today’s world, a lost item is a temporary inconvenience, but in a survival situation, losing your knife, flashlight, or reading glasses could be a HUGE loss.  Today, we run out to the store or place an order online, and a new item shows up in a few days.  Maybe we’ve learned a lesson, maybe not. In a TEOTWAWKI situation, anything  you lose is going to be much more difficult to replace.

Lanyards tie your tools to you and prevent their loss.  I use one now when working over water, high off the ground, or in a high-pressure situations, but I’m prepared to use them full time after the SHTF.

You can buy lanyard with retractable springs like some offices give you for your ID card. Retractable lanyards are available at good fishing stores where they are sold  to hold a pair of pliers so the fisherman can remove a hook from the fish and not worry about losing his tool.  Similar devices are often sold at army navy and police supply stores where they are used to hold EMS shears, which are often lost or left behind at accident scenes.  The best of these use a strong, thin cable rather than a string.

I also know rescue divers who use these to tie important tools to their gear and prevent them from sinking if dropped during an underwater emergency.  The $20 cost of the lanyard is paid for the first time it saves a knife or other tool.

Many high-end sunglasses, like the Wiley-X pictured, come with lanyards, but you can also buy a pair of Crokies or a similar restraining device that will hold them close to your head.

I have also seen at least two versions of pistol leashes, designed to keep your pistol tagging along if you drop it.  I don’t want to lose my pistol, but I’m not sure I want it tangling in my legs or dragging along behind me.  I’d definitely use one if I was on a water operation, but I’m not sure about the rest of the time.

In many cases, your long gun sling is like a lanyard, especially if you are using a single-point sling.  You can drop your carbine and transition to your pistol and the long gun stays with you.

You can make a lanyard with a piece of 550 cord.  Cut the paracord at least a good foot longer than your reach.  Tie one end to the knife or other item you wish to protect.  Tie a large loop to the other end.  To use, slip the loop behind your belt and then push the knife through the loop and pull the extra cord with your until it is tight around your belt.  Now try to use your knife, or flashlight, in both hands and make sure there is enough cord to give you full use of the device.

Depending on how you carry your flashlight or knife, you may be able to stuff the lanyard down into the pocket.  If not, tuck in inside your belt or pants.  It takes some practice and some getting used to.

If you are working at night and know you are using your flashlight, it may be easier to shorten the lanyard and tie it around your wrist.

Lanyards can restrict your use of the item and make it difficult to lend to someone else.  Think: “Can I borrow your flashlight?” “No, it’s tied to my waist.” “Whah?”

You also have to do something with the two or three feet of rope hanging off you, which means tucking it into your pocket or waist after you deploy your tool.  Still, when you absolutely don’t want to lose that mission-critical tool, a lanyard is worth considering.  Especially when bugging out or in another survival situation.

The next time you go into the woods for a hike or a hunt, try out a lanyard. Tie on your knife and give it test. If you hate it, then figure out how to make it work better. You want to figure that out before you need one in a worst-case scenario. 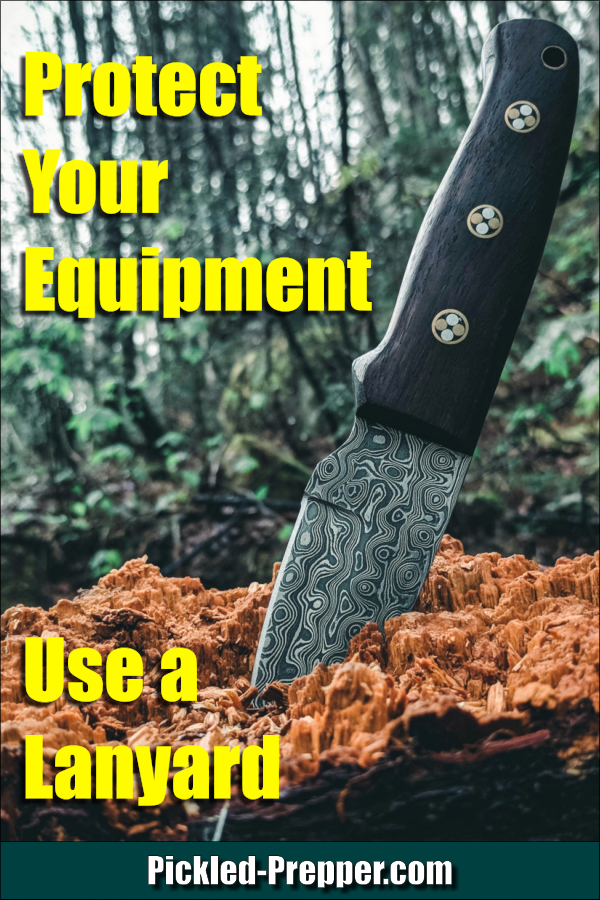