Yesterday, we wrote about the World Economic Forum (WEF) using COVID-19 to push through their agenda for a Great Reset, which when you dig below the surface is double-talk for a plan to implement socialism.  If you have not yet read it, we discuss why they want things to be “fair.” The WEF’s idea of “fair” is similar to that of communism, meaning everyone is equal, even if they are equally poor, equally hungry, and equally powerless.

Today, we’ll look at the second pillar of the great reset which the WEF says will “Ensure that investments advance shared goals, such as equality and sustainability.…to create a new (system) that is more resilient, equitable, and sustainable in the long run. This means, for example, building “green” urban infrastructure and creating incentives for industries to improve their track record on environmental, social, and governance (ESG) metrics.”

This is simply a fancy way of saying that governments should make investments not in roads and bridges, military and defense spending, or courts and justice, but in environmentally-friendly, politically correct, socially acceptable causes.  (Acceptable to whom, you may ask?  Acceptable to the socialists and the elite.)  They want to build a “better society.”  Better for whom?

The Danger of Socially Acceptable Behavior

If we govern by what is socially acceptable, then we turn the rule of law over to the whims of the mob mentality rather than the constitutionally dictated methods of governing that have serve this country so well for so long.

Too Much Government is the Enemy of Liberty

The Great Reset also calls for “Stronger and more effective government.”  I’ve always been in the camp that less government is better.  As a prepper and as an American living in the home of the brave who wants “liberty and justice for all,” government is far more likely to interfere with that desire than to enhance it.

Big government is self-perpetuating, unreasonable, self-important behemoth that exists not to uphold the constitution but to create and amplify power for the bureaucrats who populate its branches and departments.  Big government interprets and enforces rules and regulations in the ways that benefit it, not the populace.  This is why the EPA thinks a puddle on a farmer’s property should be governed by a law clearly written to apply to “navigable waterways.”  It is why the ATF can rule a pistol brace legal one day and change their mind the next, and why the Governor wants to tell you how any people you can have at your Thanksgiving dinner.

The WEF wants a bigger, stronger government, but the bigger government gets, the more it interferes with your daily life, robbing you of liberty, choices, and freedom.  Regulations that govern every little thing you do, even when you do them on your private property, make you less free.  Thanks to regulations, if you have a cow, you cannot sell raw milk to a neighbor.  Your kid can’t have a lemonade stand.  You can’t cut hair without a license.

When they have an excuse, like the coronavirus crises, government overreach grows and they shut down business, tell you what time you should go home at night, close your house of worship, and prohibit your kid from playing at the neighbor’s house.

The Purpose of Government

Many years ago, I read Atlas Shrugged by Ann Rand.  I still remember this passage from a John Galt monologue that both reminds us of the core purpose of government and warns us about what happens when a government strays outside these limts:

The only proper functions of a government are: the police, to protect you from criminals; the army, to protect you from foreign invaders; and the courts, to protect your property and contracts from breach or fraud by others, to settle disputes by rational rules, according to objective law. But a government that initiates the employment of force against men who had forced no one, the employment of armed compulsion against disarmed victims, is a nightmare infernal machine designed to annihilate morality: such a government reverses its only moral purpose and switches from the role of protector to the role of man’s deadliest enemy, from the role of policeman to the role of a criminal vested with the right to the wielding of violence against victims deprived of the right of self-defense.

Authors such as Ann Rand and George Orwell saw the future, and they warned us, but we did not listen.  We allowed things to get worse, the slow slide to continue to spiral downward.

The Great Reset Is not so Great

Simply put, the Great Reset is all about speeding up that slow slide and flushing the bowl clean, masked by terms like sustainability and green.  It encourages the government to take on new, expanded roles, to create new regulation of private companies, and to eliminate property rights – just like the Nazi’s did.  Only this time, we’ll all be treated like the Jews.

It is up to us as individuals to resist the great reset and to elect officials who will uphold our existing laws rather than reinterpreting the constitution.  It is up to us to push back and make sure extreme views do not become socially acceptable.

As preppers, we must fight against green laws that prohibit the burning of wood for heat or that regulate what we can raise or how we can use our own land. We must stand firm against lawmakers that seek to eliminate hunting or limit our Second Amendment rights.  We must speak out against government overreach, new regulations, and costly green new deals.

If you liked today’s article, be sure to read for part 1 and check back for more articles in the future. You might also enjoy The Problems Socialism Brings and How to Survive Them. 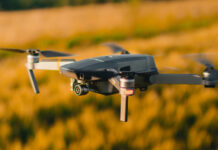 How to Take Out a Drone Post-SHTF