Guns break under the best of circumstances., but stocking a few key parts and some handy tools can keep your armory up and running in good times and bad. 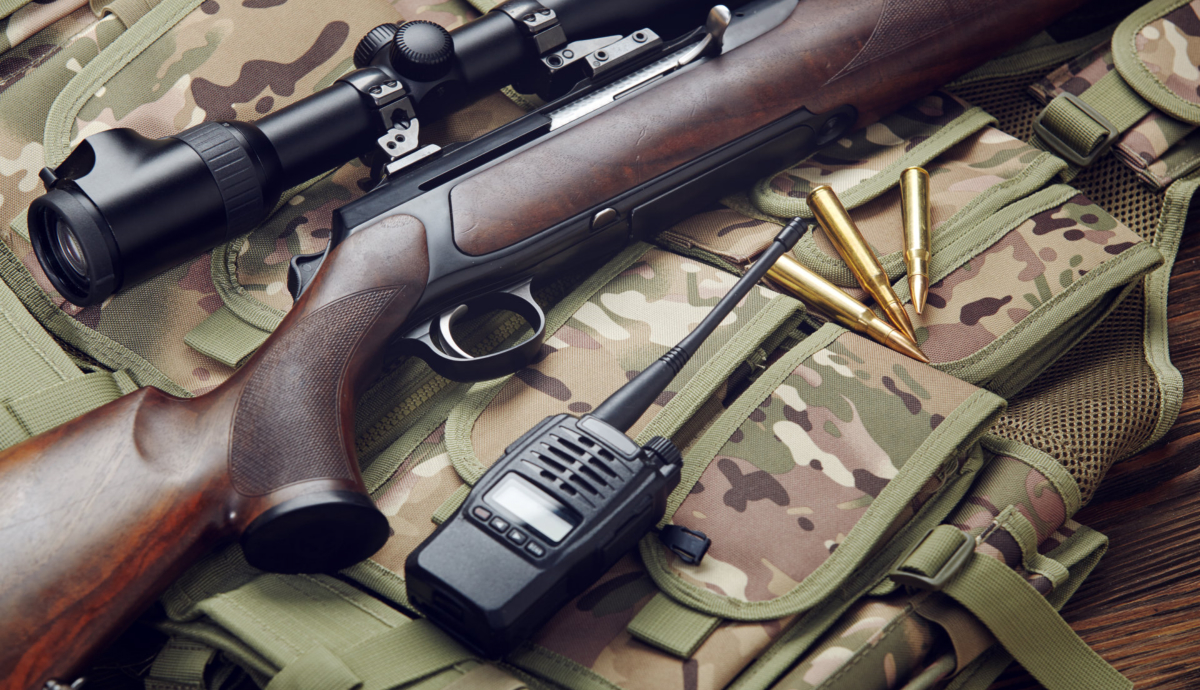 Editors Note: Pete and his wife are moving to their prepper property this week. While he is offline, we are running an article he wrote that originally ran as a guest article on SurvivalBlog.com in early October. It has not appeared on the Pickled Prepper blog before.

Don’t worry, I’m not here to recommend one gun or caliber over another, to tell you how many rounds you should store, or to insist you have a minimum number of magazines.  I do, however, want to ask if you are prepared for problems that can turn your 17-round wonder gun into a one-shot blunder or that accurate bang-stick into an expensive club.

I’m talking about your ability to fix your guns when something goes wrong, from a small thing such as a weak spring, a broken firing pin, a lost pin, or a damaged gas tube, to a bent op rod or a broken stock.

Here are a few problems I’ve experienced or seen while shooting at the range or at a competition:

If problems like these can happen under good conditions, you can expect bigger problems when the SHTF and you need to rely on our guns for more than just fun.  Even if you have a back-up gun, you need to be prepared to address common failures so your primary weapon can go back into service.

When I buy a new gun, I often buy a dozen or more magazines plus key replacement parts. Brownells is my number one choice for spare or replacement parts, but there are many other sources out there.  Whenever possible, I try to buy parts from recognizable brands rather than no-name parts that may be made in China.  I have parts from EGW, MagPul, DPMS, CMMG, Barnes Precision, Wilson Combat, Sig, and others.  (FYI, I have no financial or other interest in any of the brands of companies mentioned in this article.)

Like most serious survivalists, I “standardized” on several platforms: Glocks, ARs, and 10-22s.  All of these guns tend to be reliable, but they also have a wealth of aftermarket and replacement parts available.  Note that one set of replacement parts can likely keep several guns up and running.

I stock spare parts for all the above, plus the 1911, in individual ammo cans.  One of my close friends has Remington 870 parts and M&P parts.  Together, we cover about 80 percent of my armory.  If a Winchester shotgun, Remington 700 or other weapon fails in some unexpected way, we’ll just make do with our standard weapons.

I am a Glock aficionado and frequently carry a Model 23, but I will be the first one to admit Glocks are neither perfect nor failure-proof.  In addition to the trigger spring mentioned above, Glocks use some small polymer parts, like the firing pin spacer sleeve and spring cups, which can degrade over time or get lost during a detail strip.  My advice is to buy spares for these parts, plus the firing pin and spring. There are so many companies out there selling full parts kits for 80 percent Glock builds, so you could consider that option instead of, or in addition to, buying individual parts.

Glock parts almost always drop in and are easy to replace, requiring little or no special tools or gunsmithing skill.  As long as you are dealing with firearms from the same family, parts that fit in one Glock model will fit in the related models.

Glock, of course, is not alone in this modularity, but you may find some brands are easier to find parts for than others.  I recommend you look into this before you invest in a gun only to find spare parts are available only to gunsmiths or through limited channels.

With the AR platform, there is an embarrassment of riches when it comes to available parts and accessories.  I find springs and pins are key parts to stock, because I think more people tinker with their ARs than any other gun, and they lose small parts during disassembly or damage springs during reassembly.  So watch some videos now while there is Internet access to learn how to keep those parts from shooting across the room or getting mangled during reassembly.

As you can see in the photo, I store two extra bolt carrier groups (BCGs).  Swapping one in can sometimes address a problem in the field, assuming your gun is a mil-spec weapon.  When you are back at your base of operations and things are quiet, you can take a look at the BCG you replaced and diagnose (and hopefully repair) the problem.  Just because I stock BCGs doesn’t mean I don’t stock bolt parts as well.

You can see in the photo that I am stocking two bolt kits with gas rings, tiny springs, the pivot pin, an extractor, and more.  In fact, an extra extractor is worth keeping on hand for any critical guns as they often chip or wear down with use.  A gun that doesn’t extract the empty brass is good for only one shot.

The challenge for major AR repairs is that you might need some specialized tools.  An AR wrench is a good starting place and can often be had for less than $25.  These allow you to do many common tasks, such as remove the buffer tube, change the barrel, or swap out the flash hider.  Other tools are more specialized and more expensive.  I recommend getting an AR armorer’s kit only if you want to build your own ARs on stripped receivers.  But if you build a couple, you should learn enough during the process to competently fix most common issues.

As we move from modern polymer-framed pistols to the 110-year-old 1911, we move from modularity and drop-in parts to parts that may require hand-fitting using a file or a stone.  While you can and should stock 1911 parts like extractors, firing pins, and springs, some parts must be hand-fitted to function correctly.  If you own only one 1911, then that’s easy; fit them to the gun now, while there is time.  If you own multiple 1911s, then you either need a set of replacement parts fitted to each gun, or you will need to fit them on an as-needed basis.  Because a 1911 is not my EDC, I have opted for the latter approach.

Working on a 1911 will not only teach you a great deal about how guns function but also impart lessons in patience and possibly humility.

Save Parts When You Upgrade

Many people upgrade their guns, especially ARs, by replacing standard parts with after-market parts.  My advice is to keep every part you remove, including the screws.  If they give you an Allen wrench keep that, too, because no one has ever said “Darn, I have too many Allen wrenches,” while the opposite is not true.

For example, several years ago, I removed a quad rail from an AR upper and replaced it with a slender handguard that had a rail only on the top.  I kept the quad rail, just in case.  While unlikely, it is certainly possible that during hard use something could happen to the new aluminum handguard, denting or damaging it.  Should that happen, I could use the old one as a replacement.

I have also replaced AR pistol grips, installed night sights on pistols, upgraded shotgun bolt-release buttons, installed enlarged magazine releases, changed followers, installed a lighter trigger, and swapped out buttstocks.  In each case, the old part went into a big box of “spare” gun parts, because who knows when these might prove useful?  And best of all, these are “free” repair parts because you paid for them when you bought the gun.

If you mount a red dot, a scope with an illuminated reticle, a flashlight, laser, or other electronic device on your weapon, keep plenty of spare batteries on hand.  I often keep a CR2025 battery in the pistol grip compartment of my AR, and more than one weapon’s buttstock will accommodate AA or CR123 batteries.

Where possible, buy lithium batteries for your mission-critical mounted electronics.  They provide a longer shelf-life, do not corrode like alkaline batteries, perform better in the cold, and offer longer run times than the standard batteries they replace.  This is a no-lose decision that will only cost a dollar or two but could save your pricey optic.

Let’s assume that you clean and lube your gun occasionally.  But do you check your safeties to be sure they are functioning, inspect the ammo in your magazine or check to make sure nothing has rusted?  If you carry regularly, I recommend that you shoot your carry ammo a couple times a year and blow the lint out of your gun and holster at least once a month.  These easy steps will go a long way to preventing failures.

If you shoot thousands of rounds, then you need to do some more serious preventative maintenance.  This is akin to changing the spark plugs on your car; yeah it will probably keep running if you don’t, but it will run better and smoother if you do.  So research your particular model and see what you need to replace and when.  At the very least, you may need to install a new recoil spring every 5,000 to 10,000 rounds.  My advice is to replace any small plastic, rubber, or elastomer parts, like those in the Glock, at the same time to minimize the chance of failure while in use.  Also inspect the extractor, check the safeties to ensure they function, and if you always use the same two or three magazines while the others sit empty at home, then consider replacing those magazine springs as well.

If you want to ensure your guns are as well prepared as you are, here are a few things I consider must-haves for most semi-autos:

Many preppers are having difficulty finding ammo these days.  I recommend you spend this month’s ammo budget on spare parts.  All the ammo in the world won’t do you any good if your gun is broken and you have neither the parts nor the knowledge to fix it.

One thought on “Are Your Guns as Well Prepared as You Are?”