As I mentioned, our spring-fed gravity-flow water system stopped again on Tuesday night, so on Wednesday, I packed up my repair kit, which you can see in the photo did contain my propane torch to soften up the black PE pipe that carries our water down the mountain.  I strapped on my kneepads, my .357 revolver for bear protection, and my Cold Steel Recon knife, put on my insulated hiking boots and set off.

Having done this a couple weeks ago, I felt pretty confident that I’d diagnose and fix the problem in less than an hour.  Ha!  Man plans and god laughs.  It was not to be.

But before I get to the details, let me give you some background on why I decided to carry the .357.  My wife had been reading up on bears because a neighbor told us a bear probably chewed through the pipe.  (I don’t think so – the teeth holes seemed too small.)  She tells me that bears in this area do not always hibernate all winter and may only sleep for a few weeks.  The females will den up to give birth, but the males may not.  So I decided to bring my .357 revolver for her peace of mind. I loaded it with 158-grain lead semi-wad cutters to ensure adequate penetration if I ran into a big bear.  I had my standard load of 125-grain JHPs in two speed loaders on my other hip.

I waited until noon so I would have warmer weather and climbed up the mountain to the previous repair I made, and it was fine.  No leakage.  Darn, I was hoping that was the problem as it would be an easy fix.

Interestingly, there were critter footprints right next to the hose there and for hundreds of feet up the hill.  The good news is that this was much too small to be a bear, but some medium-sized four-legged creature with claws is using the old logging road the pipe runs along as their trail.  But I am convinced that this mystery critter is what bit the pipe the last time.

You can see the tracks in the photo below.  I’m thinking fox or coyote, but I don’t know for sure.  There were definitely nails present, so that rules out a bobcat or anything else in the cat family.

At some point, the animal veers off onto a more traditional game trail.  Later, I see deer prints, pretty fresh, but not very big. I get all the way to the spring head and I didn’t sport a single leak.

There is a splice outside the spring head, so I figure I’ll open it up and see if there is actually water coming from the spring.  I assume there is because it is wet with snowmelt and runoff, but who knows.  Maybe the pipe got clogged?  I unscrew the just one of the pipe clamps and water starts spritzing out at me.  That’s a good sign; we definitely have water! I tighten in back up and slowly make my way back down the hill.

Since my prior visual inspection detected nothing, I actually lift and examine the pipe every 10 feet or so.  At some places, the pipe is heavy and I know it has water in it, but at others, it’s lighter.  At first, I am concerned that the empty spaces in the pipe mean there is no water in it.  But then it gets heavy again and I realize the pipe is probably plugged and there is probably air trapped in the pipe.

400 feet down the hill, there is another splice where the first pipe ran out and they had to hook up a second.  I repeat the unscrewing the pipe clamp and it again hisses at me.  This time, there is more air than water, and I realize there are air pockets trapped between water pockets.  I am beginning to wonder if the pipe froze, something we have been told is not supposed to do because the water is always flowing down it.

I keep up my hands-on inspection to the point that I sometimes feel I am repelling down the pipe rather than walking down the hill alongside of it.  About 100 feet before I get to the prior repair, the pipe rattles like there is something loose in it.

Rattles?  It’s not supposed to do that!

Now I am convinced that there are pieces of ice in the pipe.  The fact that this portion of the pipe is on the shadier side of the mountain and is buried with snow explains why it hasn’t melted out.

I follow the pipe down further and there are places where it is not flexible.  I bend it with my hands, and I can hear ice breaking inside.  Finally, I reach the to the splice I made a few weeks back and  I figure this is a good place to open it up and try to get the ice out.  Apparently, my splice was pretty good because I cannot budge it.  The hose will twist on the coupling, but it doesn’t slide off.  I fire up the propane torch, wave it over the black pipe a few times, trying to get all around, and it slips right off.  Unfortunately, no water comes out.  I blow into the other pipe, the portion that leads to the storage tank, and the air goes right through.  At least that portion of pipe is not blocked.

I take the blocked pipe, the uphill part, and I flip it up and down like I’m doing a CrossFit exercise with those giant ropes.  Darned if a few cylindrical pieces of ice don’t come sliding out, along with a trickle of water.  I walk up the pipe, shaking it and tapping it with my hiking stick.  Each time, a few more funny shaped ice cubes slide out the bottom.  I must go up and down the pipe four times, shaking it, bending it, rapping on it, trying to break the ice free.

I sit there for about half an hour, hold the pipe up so that water pressure builds, and then holding it down so that a bunch of water and several ice chunk can slide out.  Most of the time, it shoots out.  Other times the ice will hold up at the exit and you have to pull it out.

I determine—rightly or wrongly, I don’t know—that the place where the pipe crosses the old road bed at a right angle is the cause of my problem.  That level spot must be where the ice froze.  So I pull the end of the pipe back up the hill and re-route it, eliminating the flat portion and giving it a much more direct-downhill path.  This actually helps and I get more and more ice coming out.  I am getting to the point where I can tell by the sounds of the water in the pipe when more ice is coming. trickle, trickle, rattle, whoosh!

Then, out of nowhere, there is a huge rush and a flood of water shoots out.  I am too stunned to grab my camera.  We’re talking more water than my garden hose on full, and it lass a couple minutes.  And with it come what has to be more than a hundred cylindrical pieces of ice just shooting out. Since this is way more water pressure than I have ever seen before, I realize that this is all that trapped water that was up there in those heavy sections of pipe.  My work has removed the vapor lock and allowed the water to flow freely, pushing the last of the ice with it.

Once the flood of water ends, I decide it’s time to re-assemble the splice and start to fill up our storage tank again so that we can have running water again.  First, I cut a fresh edge on the uphill pipe. Next, I add a second pipe clamp to the downhill side of the splice.  Then I slide a second pipe clamp on to the upper piece and try to fit it back onto the coupler or fitting.  No go.  It’s tight, wet and cold and won’t slide on past the first ridge. I get out the torch and try to figure out how my two hands can hold both pieces of pipe and the torch.  I end up sticking the downhill piece between my knees while I use the propane torch, then I carefully but quickly set the torch down and jam the hopefully-warm and pliable pipe over the fitting.  Success!  It works.  I slide down the two hose clamps and tighten them up.  Looks like we are good.

I repack my bag, grab my hiking sticks and set off down the hill.  I stop by the tank and I can hear the reassuring splash of water filling the tank.  Woo hoo!  I head home.  Both pairs of my gloves are wet and the tactical gloves with the waterproof membrane were not as waterproof as they claim, or else I had very sweaty hands, because they were wet inside out.

My shell was also wet, and I know I sweated climbing up the hill because I had to unzip it and I almost finished the 20-ounce water bottle I brought with me.  Still, I prefer sunny and low 40s to foggy, rainy and high 30s like last time.  Without the sun on the black pipe, I am not sure the ice would have ever come free.

So, what did I learn?  Here’s my thinking so far: 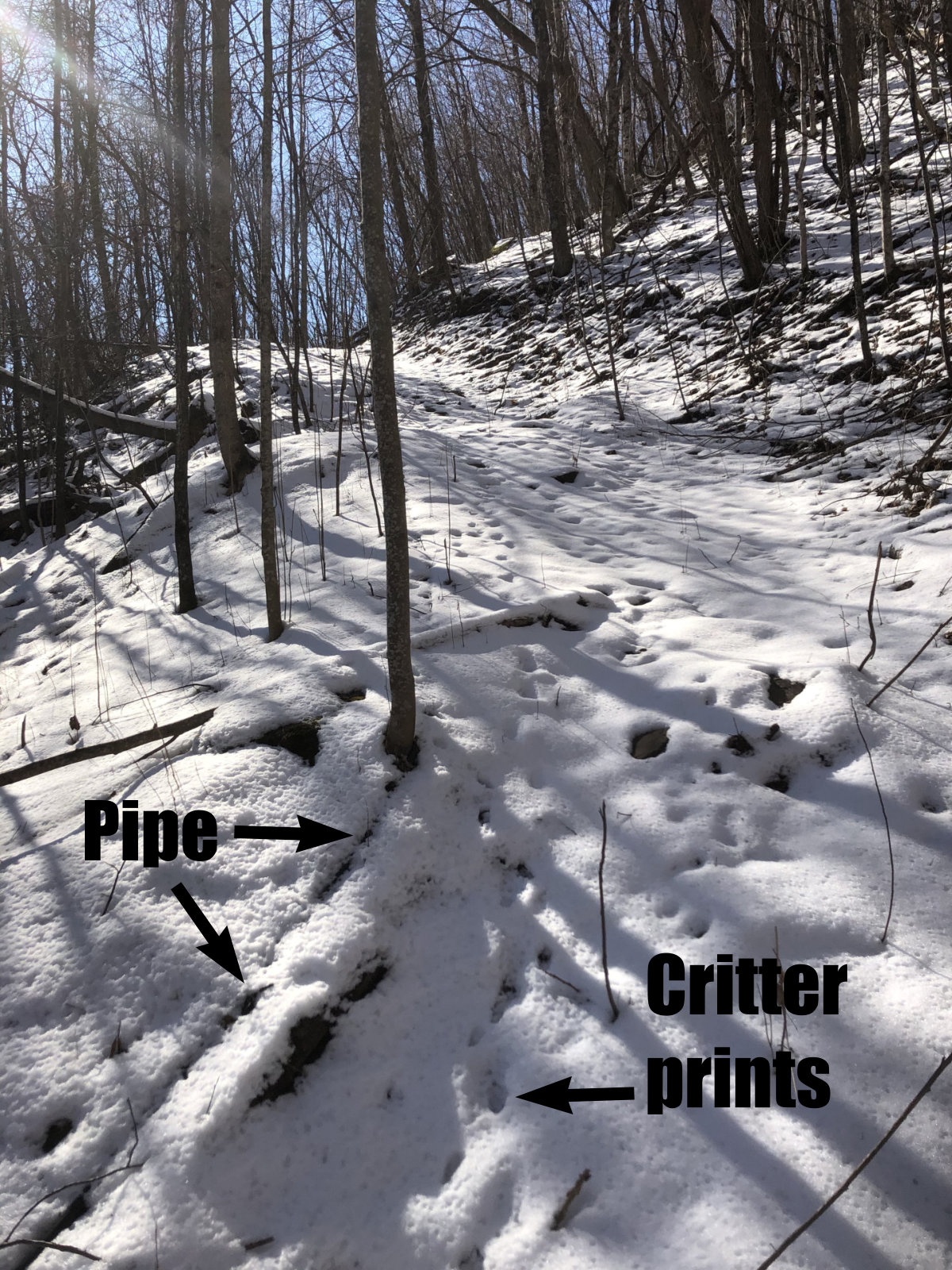