A search through our stock of radios leads to a marathon battery recharging session. 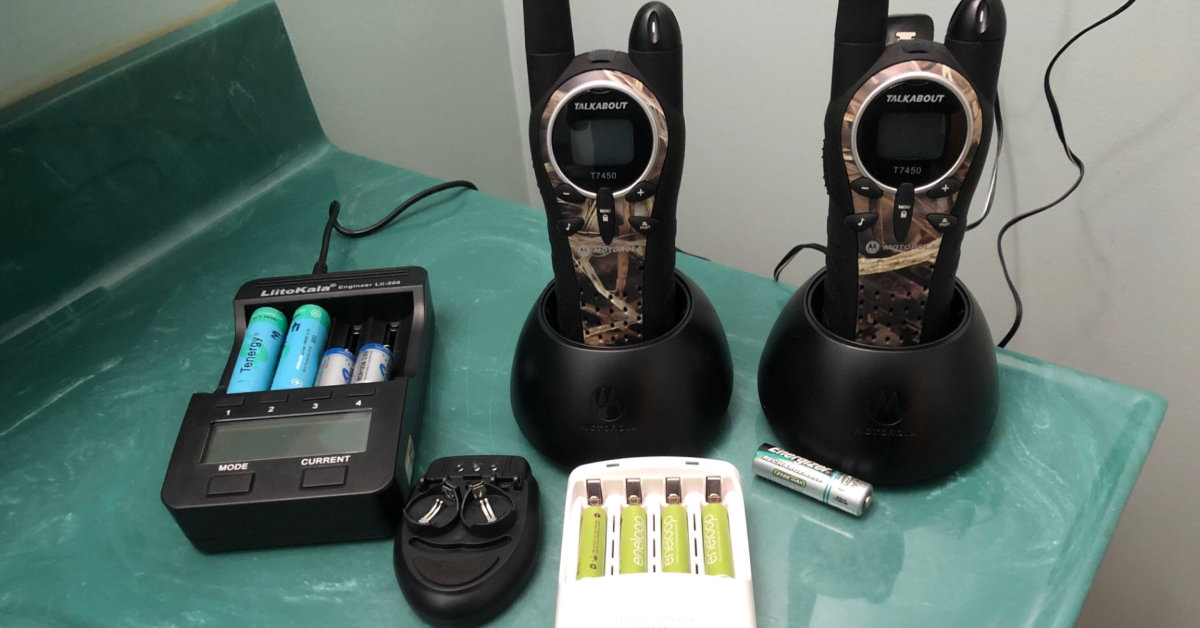 I was going through our boxes to find the FRS radios so that my wife can keep in touch with me while I am hiking around the area, and I decided to inspect all our radio components.  They are each stored in .50 caliber ammo cans lined with corrugated cardboard to provide a poor-man’s Faraday cage.

When I opened the can for our Sony shortwave radio, I was surprised to find 8 regular AA batteries and 10 Eneloop rechargeable batteries and a charger tucked away in there. Not knowing how old they were, I stuck the stored AAs in the “use first” pile, grabbed one of my other Eneloop chargers so I could charge them all in at once, and started charging them.  That took the better part of the day as they were quite dead.

I always charge my batteries on the bathroom on the sink because it is a non-flammable area and because the outlets are on a GFI circuit.  My hope is that the GFI will protect me if a battery or charger shorts out and creates an unsafe condition.  As a fall back, it’s good to know the bathroom counter is unlikely to burst into flames.  So far, charging has gone smoothly, but I feel better about not setting them on carpet or wooden tables.

After I freed up the outlet space, I charged up the FRS radios, which have built-in batteries.  Surprisingly, there was a small, inexpensive headlamp in the same ammo can.  The three AAA batteries I had stored with it were corroded.  Badly corroded.  This is why I usually store my spare batteries in a small zip-lock bag rather than in the device.  I just tossed them in the trash and put fresh batteries in another baggy and dropped it in the can.

The 18650 battery in my EDC flashlight get replaced every month.  I have four identical batteries, and I have labeled them one through four in a black sharpie.  I go through the batteries in order and recharge them when I have two batteries that have seen use.  For example, battery number two is in the light now.  In time, I will replace it with battery number three, and numbers one and two will go into the charger and get topped off.

I have other 18650s that are in headlamps, which I generally recharge these after every use because when you use your headlamp, it’s usually for a good long time.  I also have spare 18650 batteries that I charge every year, usually in the fall so they will be charged up for any possible winter power outages.

In addition to the old Eneloop rechargeable AA and AAA batteries, I have some Energizer AA rechargeables.  They are quite old but still work.  I generally recharge these every six months or so, if I remember. I also have some RCR123s and RCR2032 and a special little charger for these coin cells.

Each time I recharge my batteries, I write the date of their last charge on the baggie that holds them or on a piece of paper that I put in the baggie.  This gives me the ability to know if a battery is charged or needs a charge at a glance.  No more guessing or trying to remember when something was last charged.

When you buy commercially packaged long-term storage food in #10 cans, they often have the Julian date printed on the can to reflect when they were canned.  (This is often with MREs as well.)  The Julian date is rendered like this: 9132.  That means the 132nd day of the ninth year of the decade.

So we often write the date purchased or packaged on the can with a permanent marker.  We will also write the contents of the can since the label might fall off, especially if the can or the cardboard box it is stored in gets wet.

Similarly, I write the date I last filled a gas can on the can with a sharpie.  I might also jot down if it is no ethanol gas. This is very helpful to remind you when to rotate your gas.  How do I rotate my gasoline?  Easy – I just pour it into my vehicle’s gas tank.  Knowing that the gas may be a bit old, I always make sure I have at least half a tank when I add the old gas.

Our top priority for batteries is lighting, followed by communications and rifle optics.

Light is literally what got us out of the dark ages and is going to be critically important in a post SHTF event where utilities have failed.  Thanks to LED lights, we can produce dim lights that can run for days on a single charge.  Let me tell you, when we turn off the lights out here in the country, it is DARK.  If it is cloudy, there is no ambient light.

Yes, we have kerosene lamps, Coleman lamps, and candles, but I can’t pull any of them out of my pocket and throw 1,000 or more lumens on something making a racket outside or switch it down to 17 lumens to walk across a dark room. Plus, they don’t smell and are generally not a fire hazard.

So charge you batteries now, folks, or buy new ones.  Check the battery in your optics, your flashlights, and any radios.  Make sure nothing has corroded or run out of power.  Then think about how you will charge them if the power goes out.