Its a good idea to inspect and taste-test your long term survival food from time to time. We were dubious abut this rusted can of grits, so we gave them a try. 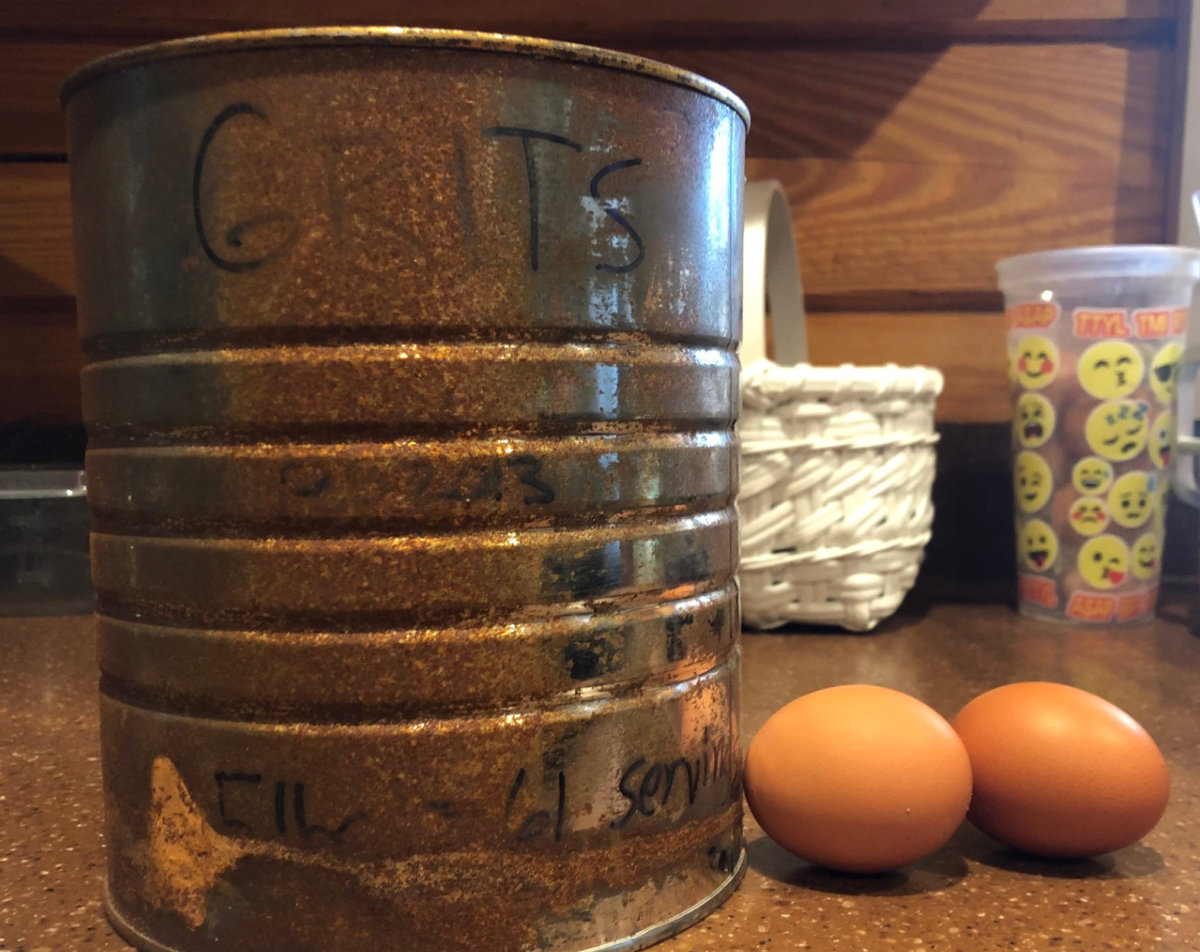 As part of our continuing efforts to rotate food out of our survival stash, today we opened a #10 can of grits that we packed away in 2013. The can, seen above, is rusty because it sat in a barn for seven years. The barn was not as weatherproof as we might have hoped.

The grits originated at Sam’s Club. In 2013, they sold a three-pack of five-pound bags of grits for just over $5, which I recall considered shockingly low. Today, the package of three bags goes $7.47 on their website, which I still consider a darn good price.

A purist will tell you that “quick grits” are not true grits. A prepper with limited cash and the possibility of limited fuel supplies in the future will jump on a deal like that. After all, one 5-pounds bag is 61 servings of 130 calories each, meaning you get 23,790 calories of food for less than $8. That’s $0.00033 per calorie, or 32 cents per 1,000 calories, making these grits a very cost-effective way to store calories. If you don’t have access to a canner, just pour them inside a Mylar bag, add an oxygen absorber and seal it up.

As you can see in the photo below, inside the can was an oxygen absorber. The packet was hard, meaning the absorber worked. Also inside the can were instructions on how to cook the grits, cut from the original bag. How thoughtful we were to include this.

My wife made the grits while I fried eggs fresh from our chicken coop. I have always liked eggs with runny yolks on top of my grits, and these were no exception. The grits tasted fine. They were not stale and didn’t taste off.

It’s been at least eighteen hours and we remain hale and hearty, so I have to assume no harm was done by eating eight-year-old grits stored in a rusty can. It was just surface rust; there was no rust inside. That’s good, because I have other rusty cans, holding everything from black beans to pancake mix, and I’d hate to learn they have all gone bad.

If you have a stash of prepper food that is more than five years old, I recommend you test it now and then test it again every two or three years. Even food stored for the long term can go bad, and food quality and taste can deteriorate over time. I’d hate to pull out my prepper food in an emergency, only to find out everything we were counting on to keep us alive was filled with weevils, mold, or had solidified into a rock. Mylar bags can leak. Cans can dent and rust. Even plastic buckets can deteriorate and break. Check your stash.

Companies base estimates for how long an item can be stored on ideal conditions. How many of us store our preps in ideal conditions, where it is dark and under 70 degrees with low humidity all year round? I’m betting very few. UV light can cause plastic to get brittle or break down. Movement can cause bags to break. There are no guarantees.

I also rotate my traditional, or wet-pack, canned foods, like the Spam, canned chicken, chili, fruit, and vegetables. This is best accomplished by eating it and buying more. If you don’t get around to eating it, donate the older food to a church food pantry or other worthy charity. These grocery cans do not have lengthy shelf lives, with most receiving best buy dates 12, 18 or 24 months after production, but they don’t instantly go bad at the two year mark.

Worse than canned goods are dried foods like crackers and cookies. Many of these will go stale in six months or so. From a taste and edibility perspective, that is far more noticeable than a canned good that is a few months past the best by date. Pasta, grains, and beans will last, but processed cereals, baked crackers, and fried snacks will not. Plan your prepper pantry rotation schedule accordingly.