While I was carrying feed out to the chicken run at about 8:30 Friday morning, I heard a distant truck struggling up our mountain road. I knew we were expecting a gravel delivery, but his early arrival surprised me. I let the chickens out of the coop and headed down to the end of the driveway. Yep, he dumped a full load on our private road, spreading it out as he drove up. Then he came back about 90 minutes later with another load for a total of 35 tons.

I drove up and down a few times to help compress the gravel. I also used a rake and a shovel to smooth out a few bumps. Later, our neighbor with a tractor used his box blade to smooth out the new gravel and cut down the bumps and fill in the holes. It made a big difference.

Like much of the country, we are expecting more warm weather this weekend. That means it’s time to feed the bees. I heated a large pot of water on the propane burner and mixed up some winter feed. I gave each of my hives half a gallon. There was a little sugar water left, so I put it outside for open feeding. Within an hour, the bees were all over it.

All three hives continue to be alive, although one seems to be slightly stronger and one slightly weaker. I didn’t harvest any honey from the weakest hive, so I’m interested to see how things turn out in April.

After lunch, my firewood supplier called and said he was on his way. I rushed to carry what remained of our first cord into the house to clear a spot to stack the new wood. There wasn’t much old wood left, only about 55 or 60 pieces. My firewood supplier showed up before long and dumped a cord of firewood close to the house. It had been a few months since our last delivery, so we chatted for a few minutes and I gave him a dozen eggs.

The wood was mostly oak. I expect it could use some more seasoning, but I have four cords of seasoned wood on hand which I will burn first. Once I stack the new wood, I will leave it uncovered. This should allow plenty of wind and sun to help dry it out. (The wind plays a surprising role in drying firewood.) A month before we need it, I’ll cover it to keep any snow or rain off.

If I end up burning this wood, it would be our sixth cord for the season. If winter stays as warm as it has been so far, I won’t need it this year. That will just make it extra seasoned for next year.

I had stacked about a quarter of the wood when a neighbor stopped by to talk about the gravel and write me a check for his share. We got to talking, and he asked why I didn’t cut down the dead tree in my yard to make my own firewood. I explained that the tree was leaning towards the power lines and if I cut it, it would land on the line, likely leaving me without power or Internet. The tree is on a hill and tilted at enough of an angle that it would be difficult to get it to fall any direction but down the hill.

We discussed all sorts of ways to get the tree to fall a different direction. For example, we could toss a weight with a lightweight rope attached over a limb and then use that to pull up a larger rope. Then we could attach the rope to the tractor and pull the tree away from the power line. We also discussed shooting an arrow with a line tied to it over the limb instead of using the weight.

Then he made a suggestion that sounded like it would work, but it also sounded like one of those ideas you get when you tell your buddy, “Hey, watch this!” and then wake up in the hospital.

He suggested I shoot shotgun slugs at the tree until the top broke off.

I am a fan of shotguns for self-defense. I’ve taken tactical shotgun classes from two nationally recognized trainers and I’ve shot in scores of three-gun matches. On the sporting side, I’ve tried my hand at skeet, trap and sporting clays. I also know that they harvest mistletoe with shotguns because it grows high in oaks and other trees. However, I have never used a shotgun to harvest firewood.

I got my tactical shotgun out of the safe because it has rifle sights, grabbed three boxes of 12-gauge slugs, and warned my wife that there would be gunfire. We went out onto the balcony, which would give us the elevation we needed to hit the top of the tree while still having a good backstop. I didn’t want to be launching one-ounce balls of lead over the ridge line, which would have been a possibility if I shot the tree from the ground.

We each put on ear protection, and I loaded five shells. I used the deck railing to brace myself, lined up the sights, disengaged the safety, and squeezed the trigger. BOOM! The enclosed deck made the blast sound even louder than normal. A neat hole appeared at my aiming spot, the center of the trunk, right where the bark had fallen off, leaving some rot visible. The tree shook, but didn’t fall.

I fired the remaining four rounds, forming a good cluster of holes in a diagonal line to the left, but the tree was resilient. I loaded another five rounds and did it again. The tree was hanging in there. I loaded my last five rounds. “I’m going to aim a little more to the right,” I told my friend. After two more shots, the tree top broke off and tumbled to the ground, bouncing off the limbs of a nearby tree. It stayed clear of both the power line and the house.

Mission accomplished. Now I just wish I had thought to video it.

Now we have to decide what to do with the lower two thirds. At least it is short enough now that if it falls, it should clear the power line. 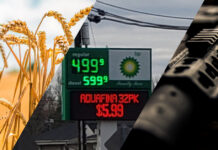 News about Grain, Gas and Guns 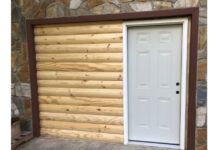 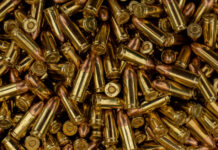