Did you ever have a friend or family member that seemed hell-bent on doing something stupid and self-destructive, but no matter what you tried to do or say, they continued down the same path?

That’s kind of where I feel about the Socialists in charge both here and in Europe. They are careening down a path of self-destruction, dragging the country and perhaps the world with them. Green energy and no fossil fuels leading to an energy crisis and a food crisis. Constant warfare leading to deaths and waves of refugees. Constant borrowing leading to crazy deficits no one can afford to pay back.

Only, I’m not so sure I want to stop them. While I don’t want the country to collapse, I fear an implosion is the only thing that can destroy these power-hungry socialists and provide the clean slate we need to start over. And these policies will cause that self-destructive implosion.

That’s where we are headed, but I think we still have to wait another couple of years before the implosion. I’m going to use that time to stockpile preps, build up my prepper infrastructure, and continue to learn and polish my skills. I recommend you do the same.

Are you familiar with Strauss and Howe’s theory of the fourth turnings? Each turning takes about a generation and culminates in a period of crisis every 80 to 100 years. During the crisis, the system implodes, leading to a catastrophe, but when it ends, the survivors are better for it. Here’s a recent article that applies this theory to what is happening now. I find myself in agreement. FYI, there is far more written about it online and in books and videos if you search for .

I encourage you to read the full article, but for those that don’t, the most recent First Turning is the period after renewal post-WWII when the Greatest Generation came home and had kids, lived in the suburbs, Dad had a good job, Mom stayed home to raise the kids, who ran up and down the streets safe and sound.

Each successive generation became more degenerative, more morally corrupt, less safe, and elected increasingly sociopathic politicians. By the Forth Turning (now), the sociopaths in power seek to use their power to dominate and rule the rest of us. As the article says:

The latter half of a Fourth Turning becomes a chaotic and confusing period–one in which many people desperately hope to just get along, whilst those who are more visionary become increasingly aware that their freedoms are being flushed away on a wholesale basis….

At some point, the average guy, who simply wanted to be allowed to get on with his life–go to work, mow the lawn, sit on the couch with a six-pack and watch the game–has had his life so disrupted by the ruling sociopaths and their increasingly manic oppression that he accepts that he must turn off the TV and do “something.”

He is not a leader, but he is a joiner.

When, in Ottawa, Canada, a few truckers staged a small demonstration, and the average guy saw it on the news, he got in his truck and joined. He may have had no real idea of how events might develop; he simply added what weight he had to the effort.

But the very fact that he is the average guy–that the bulk of the population is made up of average guys, makes their collective weight greater than those who may have been more inspired thinkers, and–more importantly–greater than the weight of the oppressors.

We are approaching that point. Stupid rules during COVID saw the first “average guy” protests. Here’s an article that includes an impressive list of stupid rules from just the past two years. When see altogether in a row, the list is astounding.

I think many of us are “average guys” and average gals, and we’re all being pushed closer to that tipping point, where we get up and join a movement because we feel like we have to do something. Inflation and low wages are pushing us to that point. Joe Biden is speeding up the trip. The Squad and their antics are helping. Defund the police and woke district attorneys are a contributing factor. Making up a bunch of genders and a rash of new pronouns is a symptom. The socialization of our schools and their attempts to teach our children things we do not agree with, which aren’t even true, may be the biggest factor for some.

When the tipping point comes, and people pour into the streets to “do something” you will have to decide if you will sit it out join the revolution.  For me, the tipping point is when the show up to take our guns. Not just my guns, but come after gun owners collectively. I may have other tipping points, but that’s one I can guarantee.

Our job as preppers is to be here for the renewal, to pass through the Fourth Turning and to feel the relief of emerging into First Turning, where the world makes sense once more. To me, that’s a world where Socialism has been beaten back, where common sense rules once again, where the free market flourishes, where government is much smaller, and saying men can’t get pregnant won’t start an argument.

I think this is what Collapsitarians are waiting for, and I have to say, the more I think about it, the more I have to wonder if they aren’t right: We have to live through the collapse before we can get to the other side. The death spiral may have started. Things seem to be sliding downhill so quickly, we may be unable to arrest our descent.

Right now, that’s the goal of my prepping. To live through the collapse or the revolution, and to be there on the other side when things start to get better. Yes, I want to survive natural disasters, regional catastrophes, and other short-term emergencies, but my overarching goal is to live through the collapse and come out on the other side reasonably whole.

What are you prepping for?

There’s been some video going around showing the BATF knocking on doors to follow up with people who buy guns. Here’s the antidote to that behavior. (Most of the action is in the first 6 minutes of the video.)

If the BATF shows up at your place without a warrant, refuse to cooperate, tell them they are trespassing, and ask them to leave. I they don’t, call the local sheriff. If this happens every time the BATF knocks on a door, they’ll stop making house calls. 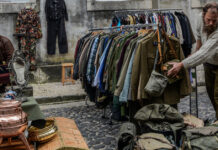 We Are Not the First Civilization to Collapse, But Probably the Last