If the world as you know it suddenly comes to an end, do you know where your next meal is coming from? 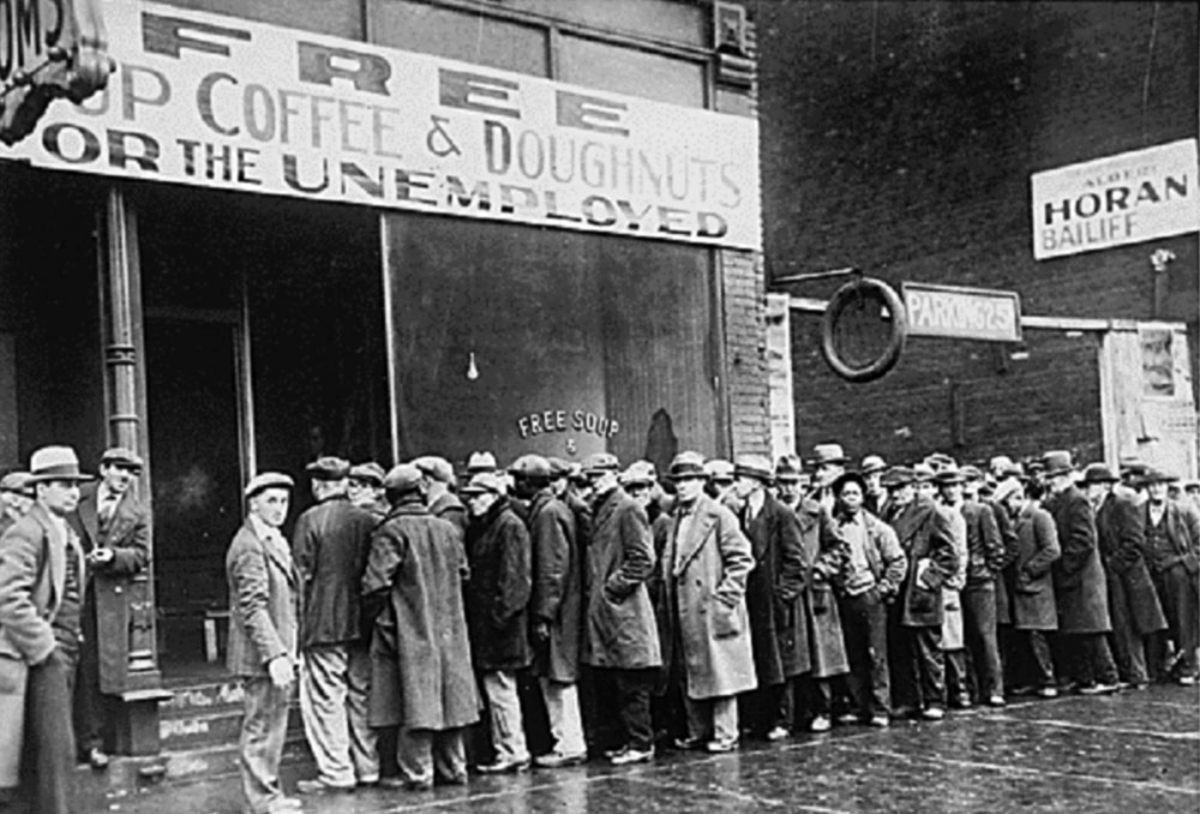 Ever since I’ve been a prepper, I’ve known that I could feed my family for months, no matter what, and that was always a good feeling.  I’ve been laid off, and I’ve worked at companies that failed, but I always knew where my next meal was coming from, even if it was a shelf in my basement.  You can, and should, do the same, because as bad as the coronavirus is, there may be darker skies ahead. We may all need to fight hunter in the future.

When it comes to fighting hunger, we have two responsibilities:  Keeping our family fed, and the helping out others.  Obviously, you need to feed and protect yourself first before you can help of others.

A prepper should look at food storage as one of the foundations of their preps.  Having food storage is important in a hurricane or snow storm that knocks out power, if a sudden illness or unemployment strikes and you are unable to work, and in a SHTF event where he country is in disarray.

If you are a prepper, you should have at least three layers of food storage, and you should build them in this order:

Layer One: A short-term prepper pantry made up of canned and dried goods that don’t require refrigeration.  These are grocery store items that you can buy anywhere, a little at a time.  Anyone on any budget can develop this layer (more on how to do so, below). Here’s our list of easy-to-buy items that you can stock to provide yourself and your family with 30-days of food.

Layer two: A long-term food storage stash that includes 5-gallon pails and #10 cans of long-term storage food basics, such as wheat, rice, beans, pasta, powdered milk, powdered eggs, and dehydrated fruits and vegetables.  These are items you will likely have to buy from specialized suppliers.  They should have a shelf life of more than five years.  Most serious preppers have this layer, or have made a good start on building their stockpile.

Layer three: More expensive, premium storage foods.  This third layer should be acquired last, and only after you have at least a year’s supply of food from the prior layers.  It can contain expensive freeze dried foods in #10 cans, like meat, cheese and fruits.  This is where the Mountain House Chili Mac and Turkey Tetrazini belong, because you are probably paying $3 or more per serving where a serving of rice in a bucket can be less than 25 cents a serving.  This is also the layer where you buy MREs or MRE Entrees, which can be more than $5 per serving and other specialized foods. This layer is not necessary for fighting hunger, but it is helpful.

Building Your Food Preps from Scratch

If you are not yet a prepper, here are three simple steps to help you build your level one short-term prepper pantry to ensure you can feed your family in an emergency:

Using step three to build up your prepper pantry over time, you can easily save up enough food to feed your family for a month or even three months.  The key is to eat your stored foods every year or two (and then replenish your stock) so you don’t waste the food or the money you spent.

Keep in mind that prepping is a choice.  If you don’t want to cook from scratch or stop getting frozen dinners, that’s your choice.  But don’t complain that you can’t afford to prep if you’re not willing to make some sacrifices.

While I have been lucky enough to never have faced a day without food, not everyone can say that.  Even in a country as rich as ours, people struggle to feed themselves and their families.  Sometimes it’s the kids that go hungry because their parents feed an addiction before they feed their kids, but sometimes it’s the parents who sacrifice and skip meals to keep their kids from going hungry.  Sometimes it’s the elderly who have a fixed income.  And sometimes its people who have had bad luck or made bad choices or who life put in bad situations through no fault of their own.

You don’t have an obligation to feed anyone besides yourself and your family, but if you can afford to do so and you have the resources, it’s a good thing to do, both now and after the SHTF.

One way to help someone you know that is hungry is to feed them yourself.  You can do this in many different ways.

For example, if you are still working but you know your friend has been laid off and is struggling to make ends meet, invite their family over for dinner.  Make more food than you need and send them home with the leftovers.  Make it sound like they are doing you a favor by taking the leftovers off your hands.  It doesn’t have to be fancy, but an extra meal will be appreciated, as will the chance to be social.

If they act embarrassed or express a desire to pay you back, clap them on the shoulder and says, “Nonsense!  I know you’d do the same for me if our situations were reversed.” If they insist on paying you back, thank them and ask them to simply pay it forward some day in the future when they are back on their feet.

You can also take someone who is experiencing a personal food shortage shopping and buy them food. (This to giving them money that might not be spent on food.) I once supervised a crew of workers where one fellow would be late to work every other Wednesday because that was when they could get free groceries from the church food pantry.  I didn’t bust his chops because he clearly needed the food. He’d bring in the bags they gave him and put them in the break room refrigerator and then get to work.  He was paying child support for two kids and had a third living with him.  He made $12 or $13 an hour, but he had a criminal record and was largely unskilled, so that was the best job he could get.

One day, I took him with me to Sam’s Club to help me out because I had a “bad back” and couldn’t lift things.  I told him I’d buy him a few groceries in return and we each got a cart.  He’d never been inside Sam’s Club or Costco and was flabbergasted at what was for sale. Admittedly, I was a little surprised that he’d never been in one, but how would he afford the membership if every penny is gong to put food on the table and gas in the car? I bought him things like a 25-pound bag of rice, a 10-pound bag of pinto beans, five pounds of frozen hamburger patties, a 20-pound bag of potatoes, and a five-pound bag of pancake mix. I think that bag of pancakes gave his daughter breakfast every weekend for the better part of a year.  It made me understand why some companies give out a ham or a turkey at Christmas time.

What I don’t do is give food or money to panhandlers or people standing on a corner with a sign and a sad story.  It’s almost always a lie.

In a post-TEOTWAWKI situation, I would be very careful about letting people know who had food and far more likely to share with a neighbor than a stranger.  It might be more of a situation of sharing a harvest or sharing a kill after a successful hunt or when butchering an animal.  Read our recent piece on bartering to get a flavor of what I am talking about.

We support our local food bank in two ways.  First, we donate canned food to food drives, especially the one at our church.  Having plenty of canned food in our prepper pantry makes this easy and helps us rotate our food.

Second, we write a check and make a donation to the local food pantry.  Your local food pantry will take food donations, but what they really want is money.  Not only can they buy food at wholesale, they need money to put gas in their truck, to keep the lights on, and for other operating expenses.

After the SHTF, there may still be organizations that feed the hungry. In the event of an economic collapse, it might be a church or other non-profit, just like they do today.  Your donation to these organizations will help at least as much then as now, and you can give them food anonymously, so people don’t know you have  stash.

If you cannot afford to give money, you may be able to give your time.  Like all employers, non-profit organizations want people who are reliable and consistent.  If you want to volunteer, don’t do it once in a blue moon.  Talk to their volunteer coordinator and come up with duties and a schedule that you can do over and over.  In other words, if you work at the soup kitchen, don’t just show up on Thanksgiving or Christmas.  Be there every Thursday night.  Or the first and third Saturday, but be repeatable and dependable so you add value.

Volunteering can be a great experience, but don’t overdo it to the point where you start to resent it. Avoid burn out.

It may be more difficult to volunteer after the SHTF, but you still may be able to find small ways to help.  For example, if there’s a big die-off due to a disaster, you may be able to foster orphaned children.

Whatever the future holds, having a food on hand is likely to make it better and is never going to make it worse. Stock up while you still can.

Here are some related preparedness articles you might enjoy: