It seems like every time there’s a hurricane or other natural disaster, FEMA hands out MREs willy-nilly.  You drive up to their outpost and some nice people load a bag of ice, a case of water, and a couple cases of MREs into your vehicle.

That raises the question: Should MREs have a role in your food storage plan?

Before we answer that question, let’s be clear what we mean by MREs:

MRE is a military acronym that stands for Meal, Ready to Eat.  Originally developed in 1975, MREs became increasingly popular with troops after the flameless ration heater was introduced in the 1990s. As the name implies, MREs are fully cooked and can be eaten cold, but almost everyone prefers to heat them up.  You can heat yours in its pouch with an MRE heater, drop the pouch in boiling water, or scrape the contents out of the pouch and cook in a traditional pan. (Be warned: The pouches are NOT microwave safe.)

In addition to providing around 1200 calories in a convenient pouch, MREs can be stored for five years at room temperature, longer if stored at cooler temperatures, and far longer if frozen, which is what the government does.

MREs come in a case of 12 meals and include six different entrées, two of which are vegetarian.

The big MRE pouch contains an entrée, one or two side dishes, dessert, drink mix, and an accessory package, each packaged in its own retort pouch, plus a flameless ration heater.

Entrées are about what you would expect from Chef Boyardee and often include pastas, stews, and a variety of meats in sauce.  There is a wide variety of side dishes, from applesauce to rice to tortillas.  Bread or a packet of crackers – which are like heavy-duty saltines – is often included, along with a pouch of jelly or peanut butter to spread on the crackers.  The electrolyte drink mix is often fruit flavored and designed to be used in a one-quart canteen.  It provides a boost of sugar and electrolytes and is strong enough to drown out the taste of those water purification tablets the troops must sometimes use.  The desserts are often the best part of an MRE and can range from chocolate-covered oatmeal cookies to pound cake.

Depending on when they were made and by what company, the accessory pouch can contain any of the following: A spoon or spork; a tiny jar of Tabasco sauce; a packet of instant coffee, creamer and sugar; salt and pepper; a napkin; toilet paper; gum and possibly matches.

MREs are convenient, easy to prepare, and kids love them.  The self-contained pouch is easy to distribute.  Because each component is in its own pouch, you can eat some now and save other parts for later.  There are usually six different menus in a case of 12, so you can trade amongst your buddies to get the components you want.  They do not require water to prepare and in a pinch can be eaten cold.  You can live pretty well on two MREs per day.  And hey, if they are good enough for our warfighters, then they are good enough for us!

At somewhere around $7 or $8 each on the consumer market, MREs are very expensive, both on a per-meal basis and on a per-calorie basis.  They are also very heavy and bulky, which makes them bad to tote around on long trips.  A pallet of MREs provides only 576 meals while a pallet of #10 cans of dehydrated food can probably produce six to eight times as many meals.  The entrées are only a few hundred calories and many of the other calories in the “meal” come from the drink mix and the dessert.

People who have eaten these in the field for several days in a row will tell you that eating nothing but MREs can cause constipation.  The packaging generates lots of waste.  Two of the meals in every case are vegetarian, which can suck if no one in your party is a vegetarian.  Some of the menu options are just not that tasty.

To MRE or not to MRE

MREs should absolutely NOT be your primary food source.  Do not buy a few cases – or a few dozen cases – and consider yourself prepped because you are just setting yourself up for failure.  MREs can be a nice addition to your food storage plan, but they should never be your sole food storage plan.

We do not recommend that preppers still in the early stages of their prepper journey invest in MREs.  You can do far more important things with that $75 than buy 12 meals.

If you look at our layered approach to food storage, you will see that MREs are on our third tier of food and should only be purchased after you have acquired your prepper pantry basics and your long term storage staples.  They are useful to stash in the car for an emergency, to carry in your pack if you go on an overnight patrol, or as an occasional change of pace, but you should not waste money on them until you have already built up a substantial reserve of storage food.

Instead of buying the full MRE, Pete buys cases of the entrées and occasionally indulges in a case of desserts.  Not only is this cheaper, but you can sometimes select the entrée you want.  Each of the cases in this picture has 60 of each entrée.  Boil some rice or a pack of ramen, squeeze your Chicken Gumbo or Lentil Stew over the top and you have a pretty good survival meal of 600 or more calories.  Carry a few MRE desserts in your pack and treat them like energy bars to give you a sugar rush when you are tiring out and need a boost.  They can also be used as rewards and treats to incentivize others.

So while MREs can play a role in your survival plans, they are not on the top of our list unless you are lucky enough to pick up a few cases from FEMA for free.

If you enjoyed this article, you might also like Fighting Hunger as a Prepper or The Top 10 Things to Buy Before the Election. 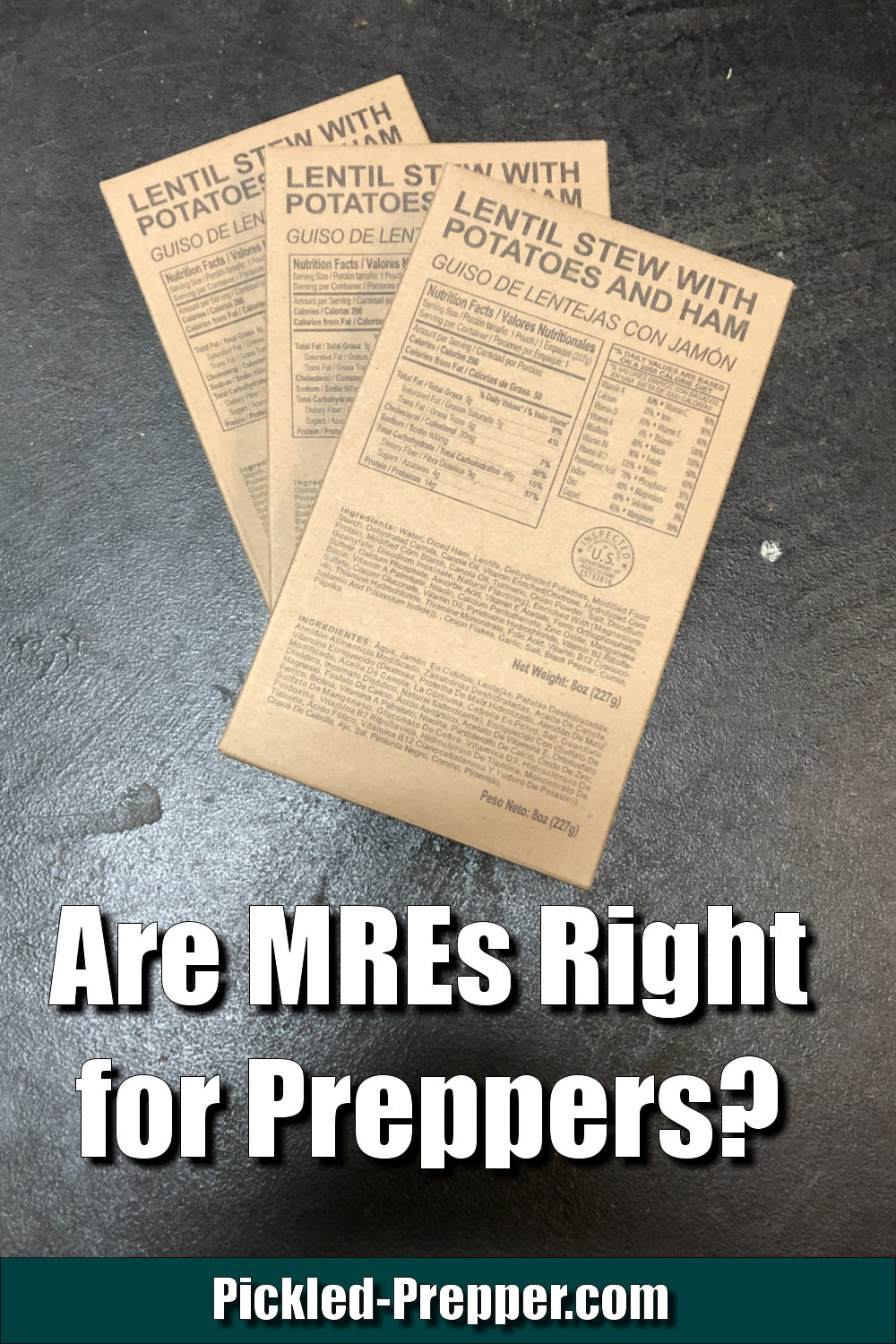