After writing about books preppers should to read yesterday, I had pulled out my copies of Patriots by James Wesley, Rawles and started re-reading it for something like the fifth time.  I could not help but notice that the neat summary of the financial and economic collapse of the United States, written more than 20 years ago, is eerily accurate today.

I encourage you to buy Patriots and other books by Rawles, and have linked to his web page where they are for sale. Below I have taken brief excerpts from his description of the rolling collapse of the country’s economy (written 20 or 25 years ago) and added my comments looking at his predictions from the perspective of today.  These predictions were spread over six or so pages. To be clear, I have used an ellipses (…) to note where content was edited out.  This could be a few words, a sentence, or in some cases multiple paragraphs.  Again, to see the full details, read the book.

Out of Control Spending

“When the Crunch came…federal spending was out of control, and the debt and deficit problems were insurmountable.  It was too agonizing to confront them, so they were ignored.”

You easily could argue that this is very much the case today.  The new Modern Monetary Theory (MMT) that is taking hold claims that countries can print as much money as they need without ill effects and thus concerns about the deficit should not limit federal government spending.  This is probably true—for  a short period of time.  The problem is what happens when that period of time draws to a close and circumstances prove that traditional and rational economic theories were right all along.   In my opinion, the inevitable failure of MMT will result in an economic collapse.

“The president didn’t let trifles like ledger sheets and statics get in his way.  The economy was on a roll; the stock market was at an all-time high…. Instead of reducing the growth in government spending, he launched an immoderate bank lending and stimulus package.”

Again, this sounds so very familiar.  Under the first three years of the Trump presidency, the economy was on a roll.  The stock market hit a series of all-time highs, including another one on Inauguration Day.  Stimulus spending and unrestrained bank lending are taking place left and right, often under the guise of COVID-19 relief.  The government is giving money away, not at all worried that it will one day have to be paid back.

“To help finance the ever-growing debt, the Federal Reserve decided to make a tactical move.  It began monetizing ever-greater portions of the debt.”

Been there, done that.  Got the balance sheet to prove it.  We just call it QE.  The fact the other countries are doing it doesn’t make it right. It just means we’ll all go down together.

“New factory orders and new housing starts dropped off….The catalyst for real panic, however, was the stock market crash…. Nobody could believe it could go down that far, but it did.  Only a few contrarian analysts predicted it.  Finally, the government suspended all trading.  There was almost no one buying any of the issues that came up for sale.

“Because the world’s equity markets were tied inextricably together, they crashed simultaneously….Late in the second week of the stock market collapse, the domestic runs on U.S. banks began.”

I think everyone with any common sense realizes that the stock market is in a bubble and a crash is likely any day.  Or maybe any month.  Until the crash happens, investors continue to pile in because it is rising at such a rapid rate and they all have a fear of missing out (FOMO).  When the crash happens, no one is going to be buying on the way down and individual investors are going to be stuck like the odd kid out in a game of musical chairs.

The point about the global markets being linked is probably even truer today than it was 20 years ago.  The United States remains the world’s largest economy. If we were to crash, it would ripple throughout bourses in Europe and markets in Asia.

“The dollar collapsed because of the long standing promises of the FDIC…When the bank runs began, the government had to make good on the promises.  The only way they could do that was to print money—lots and lots of it….

“With the printing presses turning out fiat currency day and night, hyperinflation was inevitable.  Inflation jumped from 16% to 35 % in three days.  From there on, it climbed in spurts during the next few days:  62%, 110%, 315% and then to an incredible 2100%.  Thereafter, the value of the dollar was pegged hourly….”

I think that the reasons we will see inflation will be more complex than simply the FDIC printing currency to allow banks to fulfill withdrawal orders, and I don’t think we will see costs rise that fast, at least not at first.  Banks and the government will probably limit the amount of money one can withdraw at a time, which should slow this process, but I do expect inflation to rear its ugly head in the near future.  I think the increase in the money supply will be caused my multiple factors, including stimulus and QE.

Could we reach appoint where the dollar is pegged hourly?  Well, it has certainly happened in other countries.  I guess my question is, pegged to what?  Gold?  I expect a collapse in the dollar to result in similar failures of most fiat currencies that are not backed by a commodities or some other basket of goods.

“Citizens on a fixed income were wiped out financially by the hyperinflation within two weeks.  This included people receiving pension, unemployment insurance, and welfare.  Few people could afford to buy a can of beans when it cost $150.  The riots started soon after inflation bolted past the 1000% mark.  Detroit, New York, and Los Angeles were the first cities to see full scale rioting and looting.  Soon, the riots engulfed most other large cities….”

I can’t argue with this scenario.  About the only thing different today is that the riots would start in Seattle, Portland, Atlanta, and Chicago instead of Detroit.  With the speed of communication over social media, one riot can quickly bloom into dozens.

The idea that large groups of people in an urban environment who are hungry, angry, and feel betrayed by the government will start rioting and looting is as on target today as it was when written.

“Many factories in proximity to the riots closed “temporarily” in concern for the safety of their workers, but never reopened….The trucks stopped rolling for several reasons.  One of the most obvious reasons was the flood of refugees from the cities that jammed the highways.

“As cars ran out of gas, they blocked many critical junctions, bridges and overpasses…Traffic was so densely packed that drivers were forced to just get out of their cars and walk…

“The last straw was the power grid.  When the current stopped flowing, the few factories and business still in operation closed their doors…Electricity also proved to be the undoing of prisons all over America… Despite the best efforts of prison officials, well over half the country’s… prisoners… escaped…and found their way into the vicious wolf packs that soon roamed the countryside.”

All of the above (and much more in greater detail) takes place in the first 16 pages of Patriots.  So if you want a description of what an economic collapse looks like and how it affects the country, then this is an easier read than a journal or economic report on similar failures in other countries over the past century.

The bulk of book is about what happens next, which is why it’s subtitle is Surviving the Coming Collapse.  The book illustrates living in the aftermath of an economic collapse on a close-up scale, as the fictional characters Todd and Mary Gray and their friends band together to survive.  It also looks survival in the broader scope of a country trying to recover while fighting off an invasion of foreign soldiers who are there to “help.”

I did not set out for this to be a review of Patriots, but it looks like I wrote one anyhow. I’m giving it our highest rating: 5 pickles.

As demonstrated above, Patriots has stood the test of time, despite a few chuckles over things like Todd’s computer with a 2.1 gigabyte hard drive.  As discussed yesterday, I believe this book “is in no small part responsible for the explosion of prepping and its emergence into the main stream over the past 15 or 20 years.”  I highly recommend it and think every prepper and survivalist should read it.

if you buy Patriots from BooksAMillion using our link, you will support the blog at no additional cost to you. 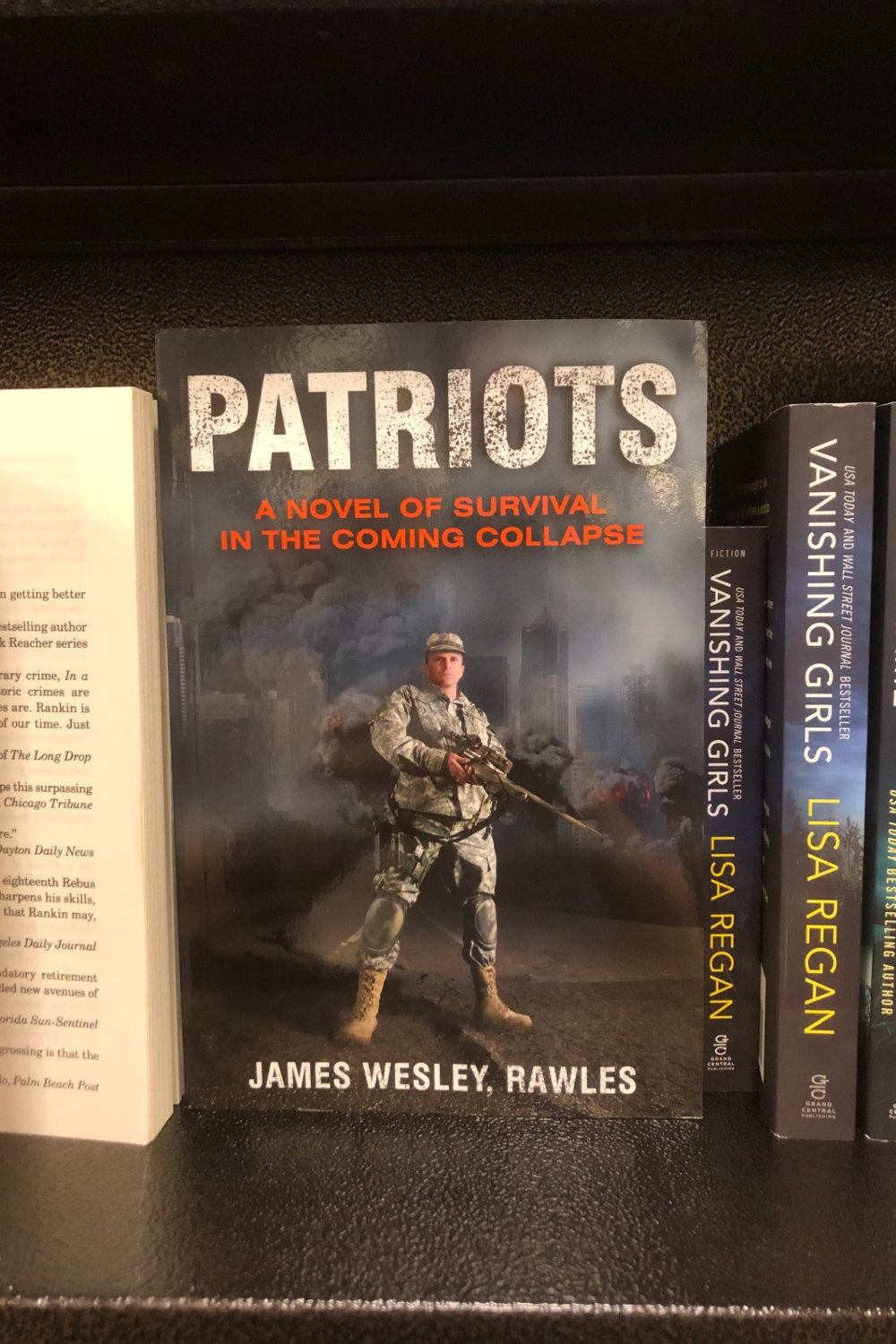