Over the long weekend, we made the long journey to our survival retreat and recovered some supplies we had cached there. Most of them had been there for less than a decade, but some items had been there since before Y2K.

Now that we have our permanent prepper property, the retreat property will be sold. This trip to remove our personal property was the first step in that process. We also met with a realtor and she gave us some ideas on how she would market it. Thankfully, she agreed that we should sell it “as is” and while we won’t be making any renovations or major improvements, she made some suggestions of what might make it more marketable without the need to spend much money. We hope it will be on the market in June.

Prior to our road trip, I finished removing the back seats from my Chevy Colorado to give us more room for gear. The seat delete was easy, but the tough part was finding and buying a T-50 torx socket to remove some of the screws. (I only had up to a T-40.) We finally found one at an automotive store. With the seats out, the cargo carrying capacity of our crew cab is greatly enhanced. That proved to be useful.

The drive saw us gradually move from early spring into mid-spring as we came down the mountain and headed south. At the retreat, the dogwoods were blooming, and the redbuds looked magnificent; neither were blooming at our house. Trees had far more green leaves and the raspberry plants were showing new leaves and robust stems coated in thorns. Admittedly, I will miss the berry picking we enjoyed there.

This was our first visit since January 2020, thanks to the lockdowns and our move. My daughter visited there last July. The house was dusty, musty, and full of dead stink bugs, but it had made it through the winter just fine.

Something had crawled in or under the shed and died there. Worried about the possibility of fleas or other bugs, I dumped a bug fogger in there and closed it up overnight. I can’t say it improved the smell, but I felt better about going in there the next day.

We not only cleaned up the house, but we also cleaned it out, making multiple trips to the dump. The house has been in the family for more than 40 years and it has its share of junk, including old paint cans, worn linens, distressed furniture, and stacks of old magazines that have accumulated over the years. Having cleaned out our own house not so long ago, we are now experts and sorting the good from the bad and quickly discarding things. We put together trash bags for the dump and piles for Goodwill and the animal shelter where they like things like old blankets.

After checking out our hidden cache in the house and another in the crawlspace, my wife and I confirmed our fear: we had more survival gear in the retreat than we could take home in one trip. We split things into two groups: Items we wanted to take home and things that could wait. When you consider we had been living without these items for more than a year, very little of it was of critical importance. Most of the items we stored there were surplus, old, or backup items, but that didn’t mean they didn’t have value.

We both decided that old clothing was something we could leave there, as was old bedding and towels. I also had to leave four 5-gallon pails of grains because they would have taken so much room in the pickup (And because some of them date back to 1998.) Other high-volume items that would take up room in the truck were also low on the priority list. This included things like 5-gallon water jugs, cases of MREs, and a 12-pack of paper towels. We’ll bring most of this stuff on our next trip.

One large item we took was a down comforter inside a duvet cover. I will add this to the guestroom at home for our guest to enjoy. We packed it in a 33-gallon garbage bag and it was squishy enough that we could cram it into the back seat.

My personal priority was firearms, ammunition, and related gear. I had a Bushmaster XM15 that was made during the Assault Weapons ban. It was old enough that it had a fixed stock, carry handle, and permanently mounted front sight. This was the first AR I had ever owned, and while it still functions fine, I retired it to the retreat when it was no longer my primary weapon. I also had an old .22 rifle stashed there. I had brought a locking gun case with us, so I easily packed those for interstate transport.

Besides the guns themselves, I had some AR-15 repair parts, including a complete bolt group (a pleasant surprise!), a spring kit, and an AR wrench. I also had ten AR-15 magazines, although most were the old school gray aluminum models. In the magazine department there were also three full-size Glock magazines (although one was an old ten-round model), one 1911 magazine, and two factory-fresh Ruger 10/22 magazines still in their original plastic clamshells.

There were also gun cleaning supplies, cleaning kits, chemicals, and bore snakes for four different calibers. I also packed up more than a dozen steel targets. I am looking forward to getting these set on our home range.

I had more ammo stored there than I thought. Some of the ammo cans I pulled out of the crawl space were rusty, and the ones from prior to Y2K were difficult to open. Still, the ammo in them looked pristine, even though the boxes were dated 1998. We’ll have to see how they shoot, but I don’t expect any problems.

It made a nice haul and will be especially useful in this era when ammo is hard to find. Old ammo makes good practice ammo and allows us to save our newer rounds. This is what I had stored there, accumulated over the years and packed in 50-caliber ammo cans:

The .22LR and 9mm will be especially useful as we consume these in our training.

I designed this ammo stash to provide some ammo for any gun we showed up with. If we had time to plan, we would like grab a couple ARs, a .308, a 12-gauge, a Glock or two, and a .38, plus a few cans of ammo. However, if we were forced to leave home without stopping by the house, we had some ammo on hand for just about any gun I might bring, such as a .45.

The retreat is pretty well stocked with standard pantry fare, silverware, china, pots and pans, etc. We took some things, like our favorite mugs, some cast iron cookware, and the good spatulas. Maybe next time we’ll get more, but I expect we will donate much of it when we have to empty the house for the new owners.

I took all sorts of tools, including an old, 16-inch Stihl chainsaw, two spare chains, and a six-pack of two-stroke oil. I didn’t try to start it, but I figure I’ll give it a once over here at home and see if she still runs. We also brought home gardening equipment and outdoor tools powered by Black and Decker 40-volt rechargeable batteries.

In the hand tool category, I took things I could use here, like a pick axe, rock bar (sometimes known as a digging bar), rolls of chicken wire and hardware cloth, boxes of screws, drill bits, rivets, nails and bolts, and what hand tools will compliment mine.

Having downsized when we left our old home, we have to think twice before we add to our cabinets, workshop, and storage room. For example, if you count the two pneumatic staple guns I have, I have four staple guns. I don’t need the two that additional manual staple guns that were there. I also don’t need duplicate open-ended wrenches, pliers or tin snips. In the end, I set aside a large stack of tools to offer my kids.

I was especially pleased to find two fixed blade knives in my cache, including one that I expect to wear regularly. That was one item I missed and wished I had not left there, so I was glad to get it back.

We also had some traditional “survival” goods there, including a compass, flashlights, camping lantern, water filter, fire starters, and rope. All of this went home with us.

Another surprise was a roll of silver quarters and three rolls of dimes. I suspect I purchased these 15 years ago, which means they have at least doubled in value since I bought them. Nice!

Lest you think a cache this size is beyond your means, keep in mind that it was built slowly over more than two decades. When you prep a little at a time, it can add up. 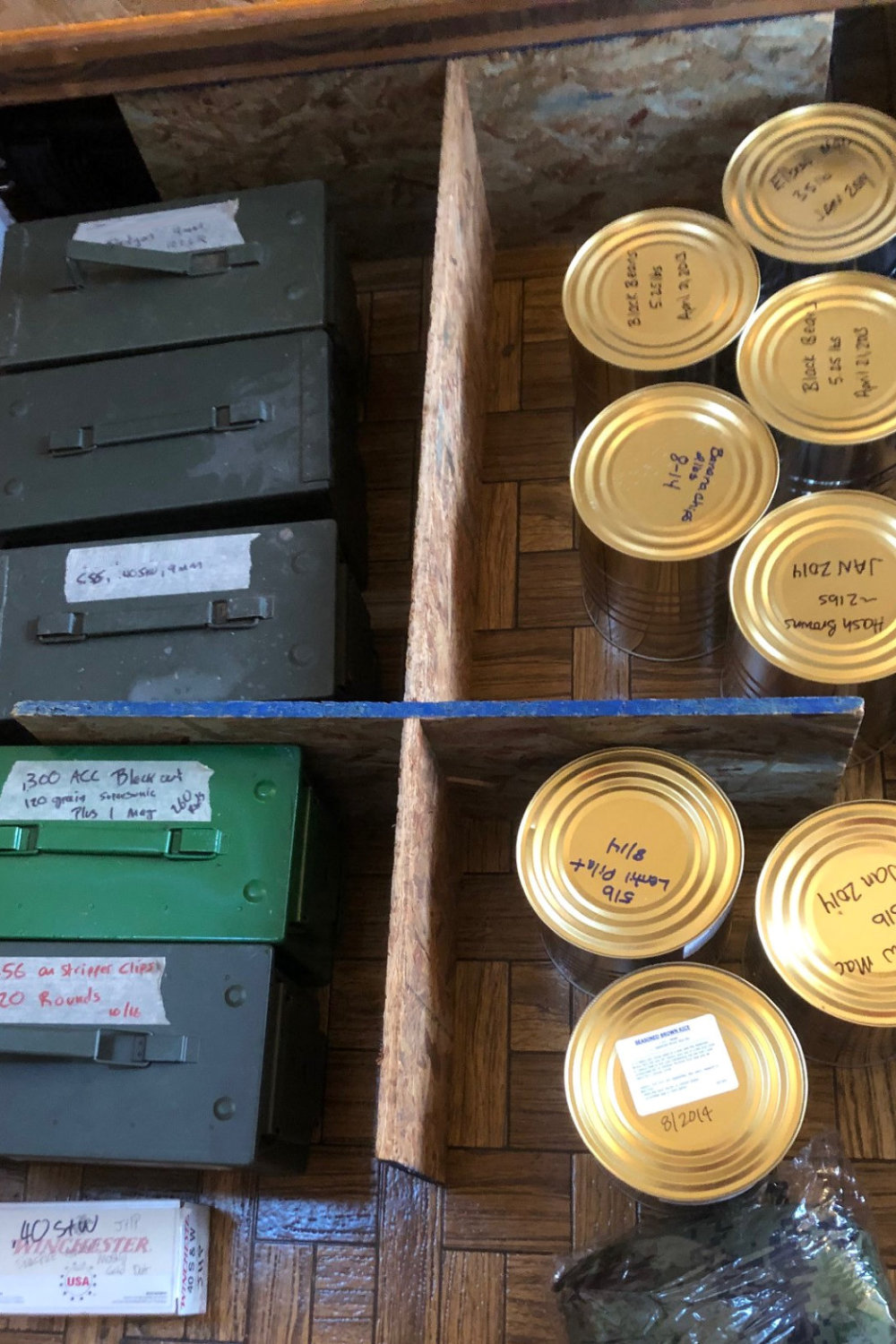