Shortages and inflation feed off each other like a snake chasing its tail and won’t end soon. Her’es what you can do to prepare. 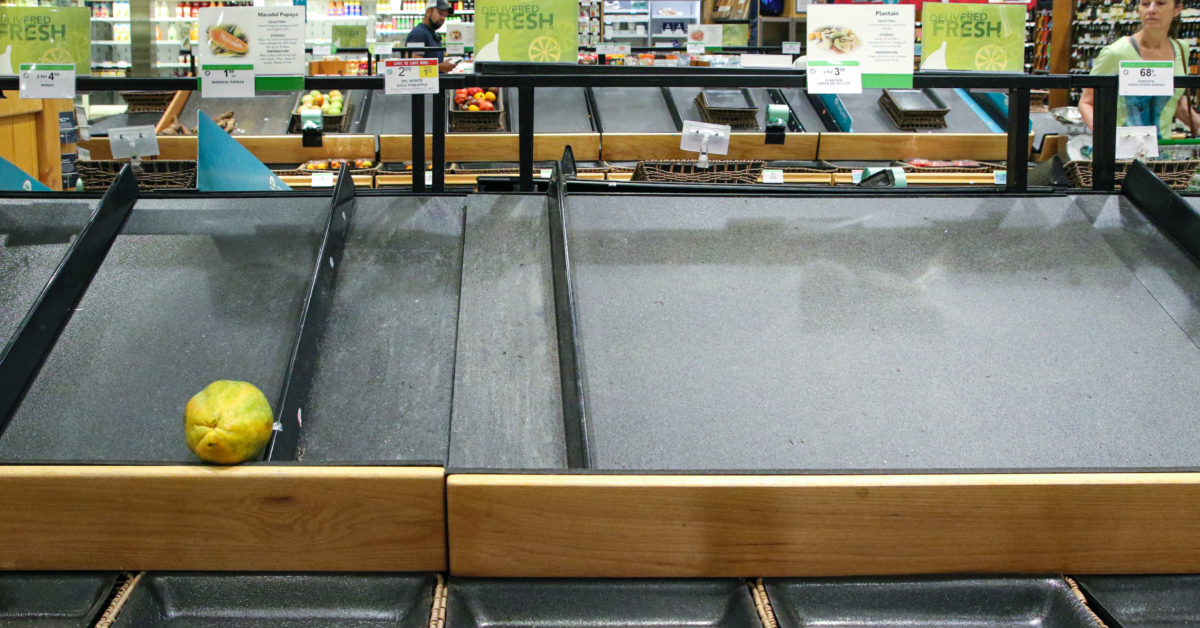 NOTE: we suggest you read today’s Prepper News Update, below, as it includes three articles relevant to today’s topics, shortages.

Peter Schiff recently said “You can print money, but you can’t print stuff.” Schiff is one of those financial guys who is always on the doom and gloom side of the table and provides a counterweight to the “buy, buy, buy” exuberance that is often the approach many take to investing. Eventually, all bubbles burst and most markets crash, so from time to time he is right.

This may be one of those times when he is right. That quote, “You can print money, but you can’t print stuff,” is certainly correct.

The United States has become a consumer rather than a manufacturer, and that means the Federal Reserve and the U.S. government have limited control over the supply side of the supply and demand equation. Even products built here depend on computer chips and mechanical parts made overseas. When the factories over there shutdown, the ports close, or the boats don’t sail, there is little we can do about it.

The Fed’s pumping money into the system can’t get ships to unload faster. It won’t make produce truck drivers, and it can’t unclog crowded rail yards. While the government may incentivize companies to build chip foundries in the U.S., they take years to build and longer to get up to speed. It will not solve the problem overnight, or even by 2023.

The weather is also beyond our control. Drought is hurting farmers, ranchers, and manufacturers that depend on water, and that is contributing to a food shortage. Freezing temperatures in Texas this winter knocked out production at critical polymer plants, limiting the supply of plastic. Hurricane Ida knocked out much of our Gulf oil supply, at least for the time being. Even when the oil platforms pump again, we don’t know that the refineries have not been damaged.

When you combine the Afghanistan evacuation, the Hurricane Ida evacuation, and the evacuation of Lake Tahoe and other areas in California because of the wild fires, there are probably more Americans who have been forced out of their homes now than at any other time in recent history. That’s not good for the economy or the country as it means lost production, lost productivity, losses at insurance companies, and lost homes and livelihoods.

As people in California and the Gulf Coast rebuild, they are going to run into shortages of construction equipment, appliances and home furnishings. That’s going to exacerbate the current shortages and drive prices even higher.

Many people think that the current wave of inflation and shortages are because of COVID-19 and will go away once the virus disappears. There is enough evidence now to know that is not the case. Inflation and shortages, which go hand-in-hand and reinforce each other, will be here for a few years, maybe until 2025 and beyond.

I expect the shortages will be cleared up first, and that should help stabilize prices. I expect government spending won’t slow down until the Republicans take over the House and/or Senate and stop the Biden Administration’s socialist tax and spend plans. If they can do that, we might be able to slow down inflation.

So shortages will last well into 2023 and beyond.

What will be Out of Stock?

The biggest shortages will be in the following areas: clothing, shoes, toys, electronics, computers, machinery and parts, furniture, appliances, drugs, ammunition, and automobiles.

There will be enough food, but you may have to sacrifice to buy it. You might have to eat out less. There will be less meat on your table, certainly less red meat. You may find yourself making rice, potatoes, and pasta more often and buying the store brand where you used to get Barilla pasta. You will want to start using coupons, comparing prices across multiple stores, and buying what’s on sale. Your family will be forced to eat their leftovers. You may even find you have to cook from scratch more often instead of buying prepared foods to save money. If you are smart, you’ll stop drinking soda and buying other “empty calorie” foods that are expensive but provide little or no nutritional value.

How to Prepare for Shortages

To minimize the impact of shortages on your life, look at everything you buy repeatedly and build a stockpile that can last six months. Apply this across all aspects of your life. Then, monitor your inventory and when you get down the three or four months left, start shopping for more, and build your supply back up to the six month level. This way, if it takes you a month to find paper towels and six weeks to get the imported scotch you drink, you will not run out.

Plan ahead for special events. For example, don’t wait until the week before Thanksgiving to buy canned pumpkin to make a pie and stuffing mix to cook for Thanksgiving. Buy these well ahead of time so you beat the rush. If you know someone’s birthday is a few months off, get what they want now so you aren’t desperately searching for it and have to pay an arm and a leg to buy it.

If you are buying toys or consumer electronics for Christmas, shop early; the shelves may be empty by the time mid-December rolls around. Heck, they might even be empty by Black Friday.

Make Your Own or Repurpose

My daughter sews for a hobby and makes many of her own clothes and sews gifts. I got a nice quilt last year at Christmas and my new granddaughter got a couple of baby blankets. She not only enjoys this, but it saves money and improves her skills.

I was working in the garden a few months ago and the seam at the bottom of my pants ripped out. My wife and I had a good laugh and then put them aside for my daughter to sew. Yes, in an emergency, I could have done it by hand, but she has the skills and travel with her sewing machine.

When we bought lemonade at the craft fair a few weeks ago, it came in a big plastic souvenir cup. That cup now resides in the dog food bag and we use it to scoop up the dog food. When I bought new boots, I didn’t toss my old boots; they became my work boots. I have a pair of boots that are so old and decrepit they are duct-taped together. I wear them when I paint. That may be only six times this year, but they keep one of my nicer boots from getting splattered with paint.

If you have kids, form a network and start passing along hand-me-downs. It might be hard to find inexpensive kids’ clothes next year.

If you have something you no longer need, share it with or gift it to someone who does. Sell it or trade it for something you need. As shortages become worse, I expect goods at yard sales, estate sales and thrift stores will become more sought after and, therefore, more valuable.

Cut Back on Consumerism

Much of what you buy is probably stuff you only want because someone else has it, you saw it on social media, or it was advertised and marketed to you. Stop over-consuming and buy only what you need and you will find fewer shortages.