The sweet smell of honey hits you when you walk into the Honey House, which is what professional beekeepers call the place where they extract, filter and bottle honey. For us, the honey house is the garage 358 days a year. For those other seven days when I’m harvesting honey, my wife parks outside, I set up folding tables and unpack the equipment, and for the next day or two it is honey processing time.

I woke up yesterday with a sore shoulder. I wasn’t sure why until I started spinning out the second day’s worth of honey. Ah! That’s why electric honey spinners are so popular. I spun the remaining batches left handed. I suppose both shoulders will now be sore.

My honey extractor is small. It holds four medium frames, but only spins one side at a time. That means you have to open it up and flip the frames around to get the honey out the other side. I did the math and figure I cranked that crank between 1,000 and 1,200 times. Because of the expense, a larger, electric spinner is not in my plans, but I might look for one I can beg, borrow or rent. It might also be possible to hook my extractor up to an electric drill. I’ve got an old corded Craftsman drill I could donate to the cause. I bet it has the power necessary to spin the extractor.

I filter all of my honey four times. The first two times are though a stainless steel double screen, which is 1,875 microns on top and 650 on the bottom. This catches most of the wax, dead bees and other random particles. Then I filter it through a 600 micron filter, followed by a 400 micron filter to remove any leftover contaminants. This can take some time. The smaller the holes, the longer it takes for honey to pass through it. Only after I filter it do I bottle our honey.

I filled all the 38 one-pound bottles I had. Then I was down to quart bottles, which hold three pounds of honey. I filled these, some with chunk honey.

To make chunk honey, you cut a hunk of honey comb and place it in the jar and fill it with honey. I’m putting in eight to ten ounces of comb honey and then filling it with more than two pounds of liquid honey. It nets out to three pounds of honey per quart jar. The end result is in the main photo, along with my leftover honey.

Unless I break out our canning jars, which I am reluctant to do, I’m out of bottles, so I’m storing the excess in a five-gallon bucket, and there are at least 2-gallons left. I’d estimate this harvest was at least eighty pounds. It may reach ninety pounds after I squeeze and drain the wax cappings, which I will do tomorrow.

I am thrilled to have exceeded my production target for this year. That just shows what starting early in the season can do for honey production.

Honey is sticky. I wear rubber gloves and am constantly peeling one or both off when I need to be un-sticky, and then putting on a new pair. Nevertheless, everything in the area ends up at least slightly sticky. The handle of the hot knife is the first victim, followed by the crank on the extractor. I’m careful, but by the time I’m done, there are blobs of honey on the table, sticky spots on the floor, the doorknobs and my cell phone are tacky, and I have honey drips on my shirt and pants. I have to take off my shoes before I go into the house.

At the end of each day, I clean up the room, but I leave the equipment until I’m done. Leaving it overnight allows every last bit of honey to drip down and into a collection pail.

My first step in cleaning the equipment is to take it outside and give it to the bees to clean up. They mob it and gather all honey, flying it back to the hives for recyling. Sometimes the cloud of bees is so dense it’s intimidating to walk by. They do a decent job cleaning up the honey, but you can’t leave it to them. I reclaim the equipment at night, and the next day I hose it off with cold water and scrub things down. There are a few places where wax has accumulated that will require the power washer. It also does a good job at blasting the garage floor clean.

I don’t let the bees clean up the frames. Since there is still nectar out there to be harvested, I am putting the frames back on the hives. I have already checkerboarded in new frames and will add more supers to the hives than I took off. Depending on the weather, I hope to harvest even more honey in five or six weeks.

How Much Honey per Hive

On my first harvest, most of the honey was from the two hives that had successfully overwintered. On this harvest, I took honey from five hives, so I averaged about 18 pounds per hive. In reality, it was probably 25 pounds from the big hives and 10 from the smaller ones.

I had been thinking of doubling my bee yard and having twelve hives next year. Given this kind of production, I might level off at just eight to ten. If I had a dozen, I’m not sure what I would do with that much honey.

Of course, if it all sells, I may change my mind. 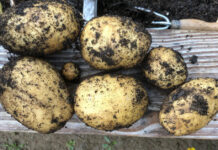 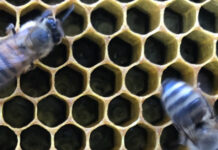 The Exciting Part of Bee Season Comes to an End 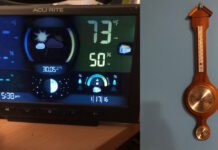 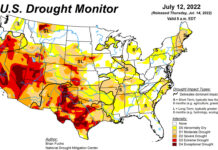 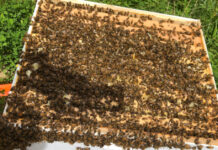