“Despite being the Pickled Prepper, I am not that a heavy drinker,” I say with a slightly slurred voice.  “Honest.”

But I am curious why they are closing liquor stores in Pennsylvania and talking about banning the sale of alcohol in places like New Orleans.

In the interest of fairness, the New Orleans mayor later confirmed that they are not banning alcohol sales, but she has given herself the power to do so, as well as the power to ban guns.  (Add tobacco products and she’d be her own miniature BATFE.) Of course, this is the same city that confiscated weapons after Hurricane Katrina, so that shows they are untrustworthy when it comes to protecting or 2nd Amendment rights.

If there was ever a time people needed a good stiff drink, it’s probably now.  Massive changes in our daily activities; forced to distance ourselves from friends and loved ones; constant news stories about infections and death; being tuck at home with the kids off school and not allowed to leave the house.  All of those sounds like a glass of wine with dinner might be called for, if not your own personal happy hour starting, oh, maybe late afternoon.

And just because you can’t watch sports doesn’t mean you can’t have a beer.  Sure, it’s no longer an excuse, but who needs an excuse?

In any case, I think these politicians just created a new product category for people to stockpile.  Forget about toilet paper, try not to get trampled in the wine aisle at Costco or Trader Joe’s.

I get that the governor of Pennsylvania is doing this to minimize the spread of the coronavirus.  The reasoning is no doubt the same as why they are closing restaurants and bars nationwide.  But by giving people several days of advanced notice (as they did in PA), anyone with even the hint of an addiction headed to the liquor store, which probably accounted for more close contact and viral spread than they would have seen in a couple weeks of normal service.

Worse yet, these bans and prohibitions will probably have a rash of unintended consequences, such as: 1) people traveling out of state to buy liquor at a time when we are supposed to be minimizing travel, 2) people with no experience (other than watching a TV) show deciding to make their own moonshine and killing themselves and others with bad product, and 3) creating a gray market in alcohol.

All you preppers who have stashed alcohol away for barter might be able to turn a few dollars when the supply and demand balance turns in your favor.

Will Diesel Rationing Happen on the East Coast? 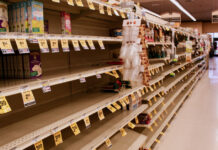