We found the Kindling Cracker to be a safe and easy way to chop kindling. Great for people with little or no prior experience or who may be uncomfortable using an axe or hatchet. 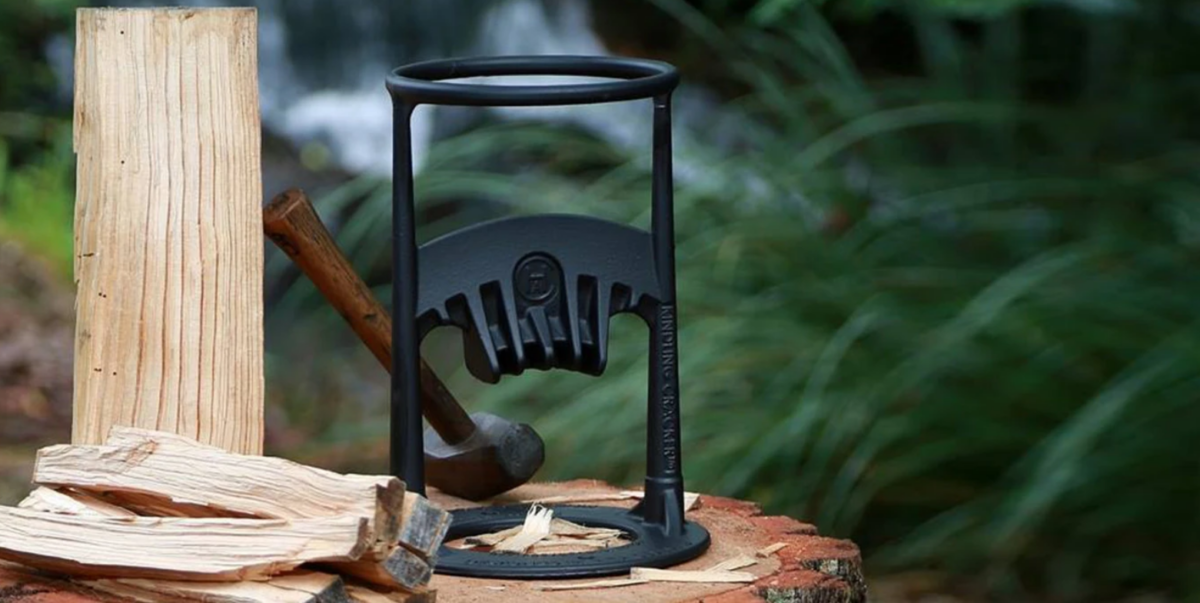 Over the years, I’ve split a lot of wood and chopped my share of kindling.  I’ve used an axe, a maul, a sledge hammer, and wedges.  For kindling, my go to is a hatchet, and I have them in several sizes and designs.

These days, I’m thinking seriously about going hydraulic for wood splitting, but I haven’t finalized that decision yet.  Before I invest in a power splitter, I want to see how much wood we burn in a winter, how much it costs me to buy it, and what size and quantity of firewood I can harvest on our land.

But kindling is another story.  After looking into a number of alternative ways to split kindling, I spent a little over  $100 to buy the HA Kindling Cracker XL.  This handy device is made in New Zealand but sold here in the U.S. in stores and online.

My chief reason to buy this device is that I wanted something my wife could safely use to split wood into kindling if I was not around.  Keep in mind that we are talking about a woman who has never used an axe or a hatchet and doesn’t own a pair of steel-toe boots.  The Kindling Cracker seemed like just the thing.

We found the Kindling Cracker to be easy to use.  Just set it down on a firm surface, plunk a log into it, and smack the log with a small sledge hammer or another piece of wood.  The force drives the log into the fixed blade, splitting it into two pieces.  Repeat with the smaller pieces until you have your desired kindling size.  (I have a handy 4-pound sledge, but I bought  smaller 2.5 pound hammer for my wife to use.)

The main safety feature is that you are swinging a hammer, not swinging a blade.  I don’t see how you could chop off your toe, slice your foot, or drive a blade into the your ankle while using the Kindling Cracker.  The blade is fixed in place, so it does not move.  Even if it falls over, it won’t cut you.  The only way you could cut yourself is if you reached into the device or perhaps fell into it, and if you are that clumsy, you probably shouldn’t be chopping kindling.

A secondary safety feature is that the very same ring that protects you from the blade also keeps the wood from falling onto your foot.  Everything happens within a small, confined space.

You can see the problem with this approach: It is possible that I might strike my hand with the hatchet.  I have not done so yet, but it could happen.  The Kindling Cracker eliminates this problem by holding the kindling in a fixed position, so your hand is then nowhere near the danger area.  All you need to do is strike the wood, driving it onto the blade or fixed wedge, instead of vice versa.

Can you hammer yourself while using the Kindling Craker?  I guess so.  If you aren’t careful, have bad aim, or are clueless, you could conceivable swing the sledge hammer in a way that might cause you some blunt trauma, but this is better than slicing open your hand or foot with a hatchet or axe.

I was surprised when I read it was cast iron because I think of cast iron as somewhat brittle.  And it is, compared to wrought iron or forged iron, but it is apparently tough enough to hold up to this application.  I have yet to see if it rusts.  I expect it does, but I also don’t expect that to reduces its performance.

Use the Kindling Cracker Safely

Finally, do take some safety precautions, such as wearing eye protection, using work gloves, and following the directions.  And keep in mind that logs with straight grain and no knots will always split easier than those with knots or strange shapes.

So far, we like the Kindling Cracker.  I’m rating it a solid 4 out of five, which is recommended. I will consider revising upwards after we see how long it lasts and how the cast iron performs over time.  I’m going to have my daughter use it and test it on a few other folks. I also want to see if “virtually maintenance free” means it does not rust and how often we need to sharpen the blade.  So more to come in the future. I think there is real potential here to upgrade this to a five.

Note: Pete purchased his HA Kindling Cracker from a major online seller at its standard sale price.  He has received no promotional or financial benefits from the manufacturer, the seller, or anyone else in return for writing this review.  This review is based entirely on his personal experience and opinions and was not influenced by any third party.

If you enjoyed this product review, you might like Product Review: The Streamlight TL-Racker Shotgun Fore End Flashlight

2 thoughts on “Product Review: How the HA Kindling Cracker Stacks Up”