We tackled multiple projects this week, some inside and some outside as we received more than 2.5 inches of rain and plenty of mountain fog over the past few days.

I built a new desktop computer for my wife, after ordering all the components online, moving her from her creaky Windows 7 box to a new Windows 10 computer. Transition was pretty seamless and all her old peripherals and her wireless network card worked just fine, which was a relief. That filled a rainy day and then it took part of the night for Windows to update repeatedly.

We also had the chimney sweep come by to inspect and sweep both chimneys. He said our flue looked remarkably good for having burned six cords over the winter and he complimented our burn habits. I try to burn the fire hot at least once per day, usually in the morning, to help reduce creosote. I also toss one of those creosote remover tubes in every couple weeks. Based on his inspection, I can only conclude that this approach has prevented the dangerous creosote build-up. I thin I will stock up on a case of the creosote removal tubes. It’s a small price to pay to prevent a chimney fire.

The chimney sweeping looked so easy that I may buy the equipment to do it myself next year.

The chimney sweep tried to sell me on buying a new EPA-compliant Blaze King stove with a catalyst, which he said would burn for 32 to 40 hours on a single load of wood. This enticed my wife, so I did some research and found that one load of wood is 80 pounds worth. No wonder it will burn a long time! I also saw reviews from people who said it didn’t burn hot enough for their house. We’ll be m sticking with our 1970s era Fisher stove, which has proven to be a workhorse and can bring the temperature up pretty quickly when it is cold. I also figure that if it is working for 40 years, it will continue to do so.

Our chicks, above, are now more than a week old. It’s amazing how quickly these little critters are growing. Already they are sporting nice looking wing feathers and trying to fly. They are voracious little eating machines and are eating more than twice as much as they did a week ago.

We started feeding them chick grit so that they can eat greens and other “real” food in addition to their chick starter feed. It’s took them some time to catch on, then one chick ate a bit, liked it, grabbed the greenery and ran off with it. That caught the attention of the other chicks who sped off after her. Pretty soon, they were all getting their share.

Because of the rain I only finished one more section of fence before the weather drove us inside. This was the long down-hill slanted side of the garden area, and stretching the fence into place was more difficult thanks to the slope. We ended up pulling it tight and fastening it along the bottom of each post, then we pulled the top tight it tight in two separate locations along the long run, stapling it to the posts as we went. One more sunny day should allow us to finish the welded wire fence. Then it’s on to the electric fencing.

After a great deal of research, I purchased a Parmak Magnum12 solar powered electric fence charger. I picked the unit because it has more output, measured in joules, than most of the chargers out there, and it is recommended for keeping bears out of the bee yard. A plus side of a large and powerful charger is that should it become necessary, I can expand my fence to cover more acreage. If I end up with 30 or 40 bee hives and have to place some of them outside the garden, I can add some poles and just extend my wires.

To buy my fence equipment, I had to venture out to a general store in a village I had never been to before. They are well off the beaten track, but boy did they have the best selection of fencing equipment I’d ever seen. I bought two ground rods, connectors, insulators, tubing for insulation, the corner posts, gate latches and a few other items all at one place. Still, I’m sure I’ll have to head back there for some additional part before I am done.

I was debating going with the AC powered unit, which is less expensive than the solar power unit, but was worried about how I would power it as there are no outlets nearby. I’m fine with using extension cords temporarily, like to run the paint sprayer or another power tool, but I don’t like the idea of relying on one to provide power for years and years.

One downside of a log home with walls that are solid wood is that it is harder to add an interior or exterior outlet than on a stick-built house. Besides thick walls, we do not have wallboard that can be cut for easy access to our utilities, no crawlspace where I can run a cable, and no exterior paneling that can be cut through. To install an exterior outlet requires either a large, long drill bit or a chainsaw.

Could I add a circuit to our breaker box and dig a trench to the garden and put a sub box with circuit breakers in the chicken coop and rig up lights and some outlets? Sure, but that would cost me far more in time, effort, and materials than buying the solar powered charger. I figure I’ll run an extension cord those bitterly cold nights if I need power in the coop to keep the hens warm or their water dishes from freezing.

Installing the fence doesn’t go well when the ground is wet and muddy—the tires on the tractor slip, for one—but it’s a perfect time to do some masonry and grout the rock wall the last owner of the house never finished.

The humid air keeps the grout wet long enough to allow plenty of time to finish it. In the afternoon, however, rain cut short the work and sent me inside. I read a book and watched some YouTube videos on how to install an electric fence. Truth is, the rain provided a welcome chance to take a break from physical labor. I’m feeling good now, and planning to finish installing the welded wire fence early this week.

“Unrelenting inflation sent the U.S. economy into a game of leapfrog. Workers demanded pay increases to keep up with the rising cost of living. Many of them got raises through cost-of-living adjustments in union contracts. To keep up with rising costs, in turn, businesses raised prices even more. Thus grew a relatively new concept in the economic lexicon, the ‘wage-price spiral.’” 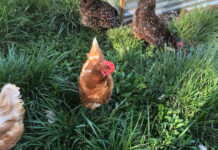 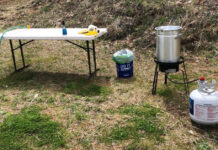 Why You Need to Raise Chickens 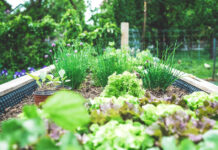 How to Survive the Coming Food Crisis 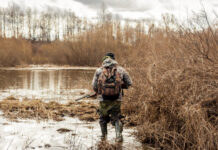 Planning for Life After the SHTF – Part 1