It’s finally time to harvest some honey and see how our bees performed this year. 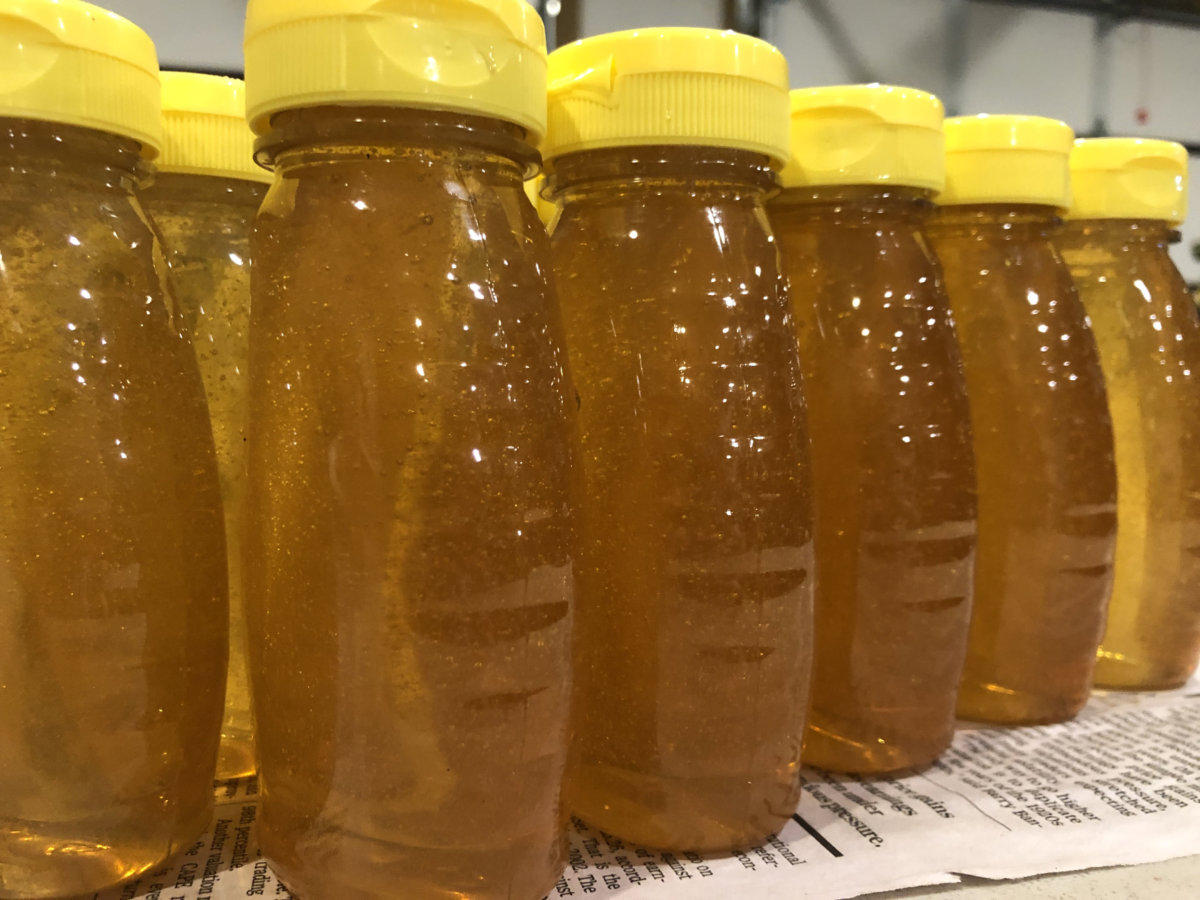 We harvested frames of honey today, sliced open the comb and spun it out in our hand-crank extractor. My daughter came to help. She could not make it up the road in her front-wheel-drive car, so she parked at the bottom of the mountain and I drove down to get her.

Unfortunately, I had only five medium frames that were fully drawn out and 100 percent capped. I tested honey in some of the open frames and it was over 20 percent water, so we could not harvest it yet. Apparently, the rain and high humidity have made it difficult for the bees to concentrate the nectar and turn it into honey. The capped honey tested at 17.5 percent water, which is ideal.

One frame I harvested had no foundation, so we cut it into four blocks of solid comb honey and stuck it in the freezer. The other frames spun out to make 10 pounds of honey. We filled up 12 eight-ounce bottles and four one-pound bottles. Counting the two frames of comb honey we have harvested, this brings us to fifteen pounds of honey so far this year.

I was tempted to extract honey from some of the larger frames in the brood boxes, but I held off. I reminded myself that this is honey the bees will need to make it through the winter. Seeing as I was not sure I would harvest any honey my first year, I am happy for the 15 pounds.

I am hoping I can harvest at least another 10 or 15 pounds in September.

A pound of honey is approximately 1400 calories, so our recent harvest isn’t going to be a prepper panacea. But if we get rolling and build our bee yard, it could make a real difference in a long-term survival situation.

By starting earlier in the year, we could get a spring and summer harvest. Even if we generated only 50 pounds of honey per hive, which is relatively low, that’s 500 pounds of honey or 700,000 calories. That’s enough for four people to eat 480 calories of honey per day for a year. That would definitely help stretch your food budget, even if it is all carbs.

Honey can also be used to create sweet drinks or fermented into mead. In a post-SHTF scenario, it could become a key ingredient in homemade granola, granola bars, and baked goods. Plus, honey and mead are a good barter item.

Clearly, we have a ways to go, but I’m happy to have made a start towards providing some of our home grown food, beyond the tomatoes and peppers we harvested.

One of my strongest hives lost their queen back in mid-July. I don’t know what happened, but my best guess is that I somehow killed her while doing a full hive inspection and testing for mites. I didn’t realize it until my next inspection two weeks later when I saw no new wet brood or eggs and a queen cup.

That’s when the wait began. I had to hope the queen would hatch, be accepted by the hive, and have a successful mating flight. People say “mating flight” like there is only one, but I have since learned that virgin queens go on multiple flights. This is the most dangerous part of a queen bee’s life because she can get eaten by a bird, dragon fly, or other predator, get caught in a storm, or fail to find her way back to the hive.

When I was harvesting honey, I checked this hive and was delighted to see wet larva and eggs in various stages plus some capped brood. That means the new queen has been laying eggs for at least 10 days. Whew! Crisis averted.

During the wait, I almost bought a queen on two separate occasions. I am glad I held off to give the bees a chance to produce one on their own.

It’s nice when things work as Mother Nature intended. The hive will now go into the winter in a healthy position with a strong, young queen.

In the short term, I have one weak hive from which I did not even attempt to harvest honey. I plan to feed this hive syrup and maybe even pollen patties in the near term. I need to strengthen it so it can make it through the winter. Assuming it does, I will assess the hive next year. If it continues to be a weak hive, I will re-queen it.

I still have supers on the other two hives, which are stronger, and I hope to harvest more honey in two or three weeks. We are expecting a spate of dry weather, so that should help.

I already have my order in for two more nucs to arrive in April, and I am doing what I can to ensure my hives don’t die off over the winter. My plan is to split some hives early next and maybe end up with six or more hives. I also plan to raise and breed a few queens of my own and keep them in nuc boxes. This way, I will have a queen available to drop in if I see another queenless hive.

I plan to build out quite a few hive bodies and supers over the winter, assemble as many frames as I have on hand, and build some tops and bottom boards from scratch.