My wife woke up today with a gravelly voice and a mild sore throat.  She said she felt “pretty good” but not 100 percent.  She was definitely hoarse. She got some coffee. A few minutes later, she coughed.

This is pretty frightening wake up call when there’s a coronavirus outbreak. It’s made worse in our particular case because she has asthma.  In the past, she has ended up in the hospital at least twice with severe pneumonia.  She gets bronchitis pretty much every year and deals with occasional periods when she has shortness of breath.   Her asthma is generally well controlled, and she usually avoids the flu, but who knows how her lungs will react to the coronavirus?  This is one reason we’ve voluntarily quarantined ourselves.

I hop on the county health department website and look at what it takes to get a COVID-19 test around here.  Basically, you have to have the appropriate symptoms and have failed a rapid flu test.  It doesn’t say where to get either test, but there’s plenty of info on who to call if we have no insurance.  Seems to me they may have their priorities a bit backwards. Let’s get the test first and worry about how to pay for it later.

Right now, we don’t know what she has.  I couldn’t take her temperature because she’s been drinking coffee.  Finally, she finishes her cup.  I warn her not to drink or eat anything for 30 minutes, and I get out the digital thermometer and sterilize it with alcohol before I rinse it.

Half an hour later, I turn on the thermometer and it gives a very weak “beep.”  I look at the LCD panel and it’s not showing anything.  I push the button a few more times – nothing.  Uh oh.

“I hope you have another one of those,” she says.

“You bet I do, because as a prepper, I know that one is none and two is one,”  I tell her. She looks at me like she’s never heard this before.

I head into the basement cache and pull out the small first aid kit.  Lots of supplies for bloody wounds and broken bones, but no thermometer.  I lift the big plastic bin of emergency med supplies off the shelf and there are two brand new digital thermometers right on top of its contents.  I grab one, unpack it, turn it on, and it works just fine.  Whew!  Saves me from searching further for the old battery-free mercury thermometer that I know is in there somewhere.  I grab a pack of 30 thermometer condoms — I mean protective covers — close up the big tote, and slide it back on the shelf.

I repeat the sterilization cycle and stick it in her mouth.  There’s a tense 60-second wait and suddenly the thermometer lets out a series of high-pitched beeps. I pull it out and we both look at it.  Her temperature is below normal.  Whew!  No fever.  Since that’s a tell-tale sign of COVID-19, we both relax a bit.

“See?  It’s just seasonal allergies,” she tells me.  “I probably shouldn’t have worked in the garden this weekend.”  It’s true that the tree pollen has started to fly.  She’s relaxed, comfortable knowing  that it’s the same stuff she deals with every year.  Me, I’m still a little anxious.  No fever, I tell myself.  That’s a good sign.

I re-sterilize the thermometer and change the, protective cover, and take my own temperature.  It’s 98.6, which confirms my good health but also demonstrates that the thermometer is working just fine. The tension and worry subside and I tell her to relax and take it easy.

She calls her doctor and makes an appointment just to be safe.  They schedule her for the next day and tell her not to come inside the building but to call when she is in the parking lot.  They will come out and fetch her.  I don’t know if this is the new standard procedure for all patients, or if it’s only for people with a cough.  I guess we’ll know tomorrow.

In the meantime, I opened up the dead thermometer and find some corrosion on its tiny little SR41 battery and one of the contacts.  That’s a size of battery I’d never heard of but is apparently used in watches.  I have quite a few spare batteries, but none in that size.  I’ll have to do so in the future since you can get a pack of them for just a couple bucks.

Meanwhile, the old mercury thermometer I’ve had since my kids were born will outlive me, assuming no one drops it.

I needed two AA batteries today and was shocked to find that I only had 24 left.  Why? Because I had recently returned 48 to Costco due to extensive corrosion while they were still in the package.  (I love Costco, but that was the third package of their Kirkland batteries that I have returned in the past two years.  When it comes to alkaline batteries, I now buy brand name batteries, mostly Energizer and Duracell.)

I decided to save the 24 AAAs for a real emergency and broke a package of Eneloop and a charger out from our emergency supplies.  They had been in storage long enough that they needed a full recharging, but eight hours later, I am up and running.  The package had 12 batteries in it.  But since this is an emergency where the power has remained on, charging them up was a no brainer.

Eneloop batteries come charged and it says right on the package that they retain up to 75 percent of their charge. I guess I’ve head these a bit longer than that because they did not retain enough power to run my blood pressure cuff. Now I know I need to set up a schedule where I re-charge all my Eneloop batteries annually.  I already do this with my 18650s and RCR123s batteries, usually right before hurricane season.

The eneloop are NiMH, which is not a bad technology.  In my opinion, they are better than NiCad, but not as good as rechargeable lithium batteries.  They are much cheaper than rechargeable lithium cells, however.  I have never used the Amazon Basics rechargeables, but a friend of mine swears by them. Personally, my battery of choice is the 18650 and I’ll go out of my way to by devices that use it. 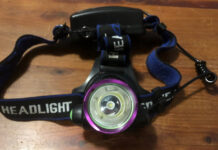 How to Pick the Best Headlamp