While cases appear to be on the decline, it’s important to recognize that winning the battle is not equivalent to winning the war. The coronavirus remains a deadly enemy and if we let our guard down, it could claw its way back. 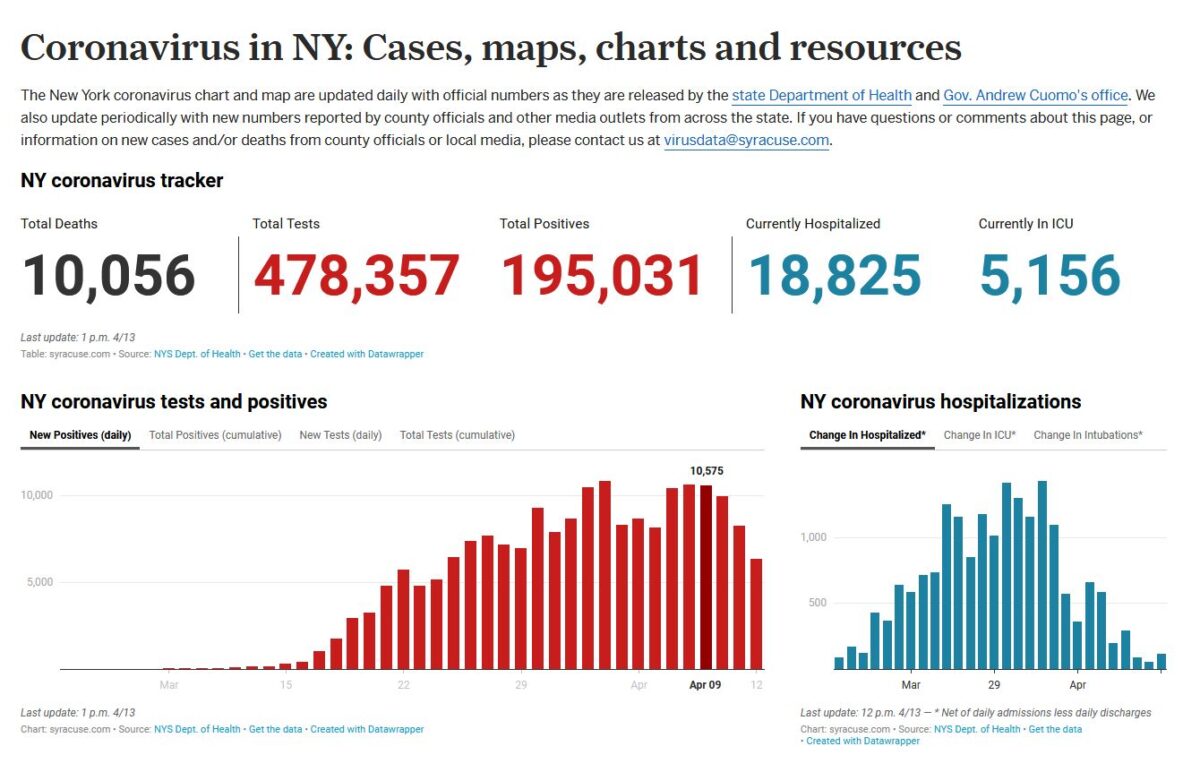 New cases of COVID-19 reported in the U.S. held steady in the past 24 hours, climbing 25,507 to 580,878, an increase of less than five percent.  This marks the second day of only five percent growth and seems our best evidence yet that social distancing is working.

The death toll in the U.S. remains well under its peak of 2,000, with 1,551 deaths attributed to the coronavirus reported in the past 24 hours.  Deaths in New York are also tailing off, with 671 reported.  New York also experienced a significant drop in COVID-19 cases, with 6,337 reported, a drop of 40 percent from its worst days.  Both ICU admissions and intubations were down as well.

We also saw flat growth on a global basis, with 71,000 new cases, bringing the total to 1.935 million and deaths to 120,000. The global total of reported cases should exceed 2 million within the next 24 hours.

Now that we have two consecutive days of decreases, we can conclude that the peak is behind us in most states.  Field hospitals are being dismantled and politicians are bickering about how and when we relax the stay home orders, but it’s important to remember that we are still seeing tens of thousands of new cases per day.

When and how to relax stay-home orders is a difficult decision.  I think the President should roll out a national policy to provide an overall direction and let governors keep more restrictive policies in place as they see fit.

My advice would be to wait until the end of the month, which is about two weeks away, before doing anything.  Then roll things out slowly.  Require people to wear masks and businesses to clean and disinfect regularly.

When the virus was emerging, the country limited groups to 250, then 50 and finally down to 10 people.  Let’s reverse that by allowing groupings of 10 or fewer people, starting on May 1.  Allow businesses that can operate with 10 or fewer people in a room to re-open.  This will include many small retail stores, barbershops, hair salons, and other businesses to put their employees back to work.

Let’s also let truck stops re-open and maybe have states open rest areas, but only for truck drivers.  We need these guys to transport food and goods; let’s not make things more difficult on them than they have to be.

Wait a month to see if new pockets of disease pop up, and re-institute closures in those cities or towns where they do. If the case load continues to drop, go up to the next level, whether that’s gatherings of 25 or 50 people.  This may allow some smaller bars and restaurants to open.

Keep the schools closed until fall.  Cancel state and county fairs.  Keep concert halls, sporting arenas, theaters and other mass gatherings (including church) closed for the time being.  Wait until at least June 1 before re-opening international flights, and then do so only for countries with low or no cases.

Re-open beaches, state parks and other recreational activities, but require people to practice social distancing or get reservations and limit access so they do not become over crowded. Social distancing is working and we do not want to eliminate it entirely until a vaccine exists.

I think New York City is going to be the toughest place to re-open without a wave of new cases.  For all the reasons we discussed before – mass transit, high population density, skyscrapers, elevators – the city is a potential breeding ground for the coronavirus and a super-spreader’s dream come true.  We may not be able to fully re-open NYC and other densely populated urban areas until a rapid test is available and everyone who wants to leave home can be tested weekly.

For some perspective, read yesterday’s report or look back a week ago when cases grew 9 percent.