While all the attention has been focused on election, COVID-19 continued to spread in the U.S. and globally, surpassing the 10 million case mark in the U.S. and the 50 million number globally.

COVID-19 Cases spiked in the U.S., peaking at 132,156 on the 6th and exceeding 120,00 on both the 5th and 7th.  Deaths have also increased, although not as dramatically, with more than 1,000 deaths for five days in a row, the first time that has happened since August.

In the past 24 hours, reported cases declined to 103, 657 and deaths dropped to 464.  Total deaths in the U.S. attributed to coronavirus are 238,000, although many of these patients had comorbidities.

I overheard two strangers whom bumped into each other in a public place and were united in their decision not to masks.  One was convinced that Biden’s election would mean they would be forced to wear one every waking hour of the day.  The other said they expected the pandemic would be magically cured and things would reopen so that Biden would get the credit for “beating” the coronavirus as well as the economic resurgence that would accompany the reopening of states like California and New York.

My feeling is that viruses are immune to politics and presidents.  COVID-19 is going to spread regardless of who is in charge and what measures they put in place, short of a Chinese-inspired lockdown where people are literally welded into their apartments.  I also predict that the disease will continue to become less lethal and that the vaccines will only last for a limited time.  Eventually it will morph into something we all have to live with, much like the flu.

In the week since our last report, France has overtaken Russia to become the country with the fourth-most cases as more than 1.8 million.  The rate of new cases in France also continues to increase, up from 23 percent last week.

The United Kingdom also climbed a notch, even as its rate slowed to 15, while Italy and Belgium are up two places, while Poland, which surged 44 percent, and the Ukraine moved up even faster, demonstrating that Europe continue to see faster viral spread than much of the rest of the world.

Germany’s rate dropped from 25 to 10 percent, a drop so precipitous that you have to question the extent of their testing as we’ve never seen another country damp down their case rate so significantly in such a short period of time.

Demonstrating the cyclical behavior of the coronavirus infections, both India and Bangladesh are seeing growth in low single digits after a case count that roared into the double digits earlier this year.  For a while, it looked like India would challenge the U.S. for the dubious honor of having the most cases, and their growth dropped while the U.S. saw a surge. We also seeing cases in the Southern Hemisphere drop as cases in Europe, Russia, and the U.S. expand.  Perhaps there is some seasonality to the virus, whether it relates to ambient temperatures and sunlight or the behavior of people in different weather conditions.

Pfizer reported that their vaccine candidate is on track to completed by the end of the month and if emergency-use approval is granted, it could start rolling out across the U.S. in early next year.  ZeroHedge is reporting that the results may show an effectiveness of more than 90 percent.  How this will be effected over time and over a more diverse population of patients, including those with lung disease or heart disease, is yet to be determined.

Another vaccine from Novavax has been awarded a fast track designation by the FDA.

To put this report in perspective, we recommend you refer to last week’s report November 2: Europe Continues to See COVID-19 Cases Surge. 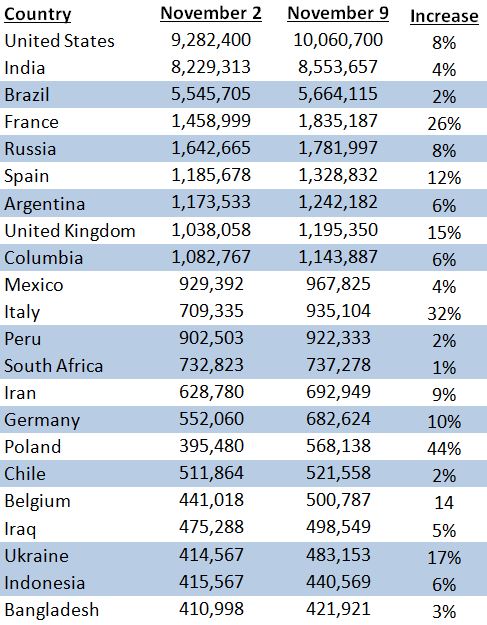